NEW YORK (AP) — The New York Police Department will have to give its force more training on protecting the rights of transgender people as part of a deal announced Tuesday that settles a civil rights lawsuit accusing officers of mocking a transgender woman by putting her in pink handcuffs.

The settlement also requires the city to pay Linda Dominguez $30,000 over allegations that the officers wrongly accused her of misrepresenting her identity while arresting her in the Bronx in 2018, according to the New York Civil Liberties Union.

“I never want anyone to go through the abuse I experienced from people sworn to protect me,” Dominguez said in a statement. “As an advocate for my community, I couldn’t let this go.”

Under the terms of the settlement, the NYPD has agreed to redistribute its guidance on interactions with transgender people to every officer. It also will retrain officers in the Bronx precinct where Dominguez was arrested on the rights of transgender and gender-nonconforming people, her lawyers said.

The NYPD sees the steps as a way to “reaffirm the department’s ongoing commitment to improving relations between the police and communities officers serve,” city Law Department spokesman Nick Paolucci said in a written statement.

According to the lawsuit filed last year by attorneys from the NYCLU and the American Civil Liberties Union, Dominguez was walking through a Bronx park to her apartment when officers stopped her for being in the park after it was closed.

Dominguez speaks limited English and had difficulty understanding the officers, but she first gave them her original name along with her birth date and address, she said in the lawsuit. The officers took her to the station house, where she explained to a Spanish-speaking officer that she was transgender and that her legal name was now Linda, as shown on a valid state identification card, she said.

The officers placed Dominguez in a cell, handcuffed to a bar or pipe using pink handcuffs, and left her in the handcuffs all night, according to her lawsuit. The officers referred to Dominguez by her masculine first name throughout her detention, laughed at her and referred to her as “he” and “him,” she said.

Dominguez was arraigned the next day on charges of trespassing for being in the park after hours, as well as false impersonation. The charges were dismissed a few months later.

Dominguez, 45, a cosmetologist and an activist for the rights of transgender immigrants, said that the arrest caused her “mental anguish, ongoing humiliation and embarrassment” and that she remains afraid of the police. 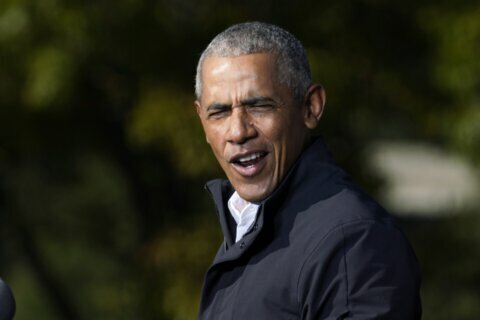 Barack Obama to be honored next month by PEN America