The FBI said Sunday that its San Antonio office is investigating an incident after video was taken of a caravan of Trump supporters surrounding and then following a Biden campaign bus on Friday.
Listen now to WTOP News WTOP.com | Alexa | Google Home | WTOP App | 103.5 FM

The FBI said Sunday that its San Antonio office is investigating an incident after video was taken of a caravan of Trump supporters surrounding and then following a Biden campaign bus on Friday. President Trump retweeted part of the video Saturday night, writing “I LOVE TEXAS!”

After the news about the FBI investigating hit Twitter, Mr. Trump tweeted that the FBI should be investigating “terrorists, anarchists, and agitators of ANTIFA, who run around burning down our Democrat run cities and hurting our people!” He also wrote that in his opinion, the supporters “did nothing wrong.”

A Biden campaign official said the incident occurred Friday on I-35 between Austin and San Antonio. The official said vehicles with Trump signs and flags surrounded the Biden bus and tried to “slow the bus down and run it off the road.” Law enforcement assisted the bus to its location after 911 was called, the official said.

Texas House Representative Sheryl Cole tweeted the Biden bus was supposed to make a stop in Pflugerville with the Austin Young Democrats but she wrote they had to cancel due to security reasons.

In a statement, the Biden campaign said that “rather than engage in productive conversation about the drastically different visions that Joe Biden and Donald Trump have for our country, Trump supporters in Texas [yesterday] instead decided to put our staff, surrogates, supporters, and others in harm’s way. Our supporters will continue to organize their communities for Joe Biden, Kamala Harris and Democrats up and down the ballot, and to the Texans who disrupted our events today: We’ll see you on November 3rd.”

An event with Wendy Davis, Congressman Lloyd Doggert and Austin Mayor Steve Adler was also canceled, but the Texas Democrats to CBS Austin affiliate KEYE the event was canceled as not to take away from vice presidential nominee Kamala Harris’ visit to the state.  Harris made campaign stops in Forth Worth, McAllen and Houston.

The Trump campaign has not yet responded to requests for comment.

In addition to retweeting the video, Mr. Trump mentioned the incident at a rally in Michigan on Sunday, claiming his supporters were actually protecting the campaign bus.

“You know they were protecting [Biden’s] bus yesterday, because they are nice,” Mr. Trump said. “They had hundreds of cars.”

the president also appeared to mention it at a rally in Pennsylvania on Saturday night.

“Did anybody see the picture of their crazy bus driving down the highway, they’re surrounded by like hundreds of cars?” Mr. Trump said.  “They’re all Trump flags all over the place. What a group. No it’s like a hot thing. See that’s really #1 trending.”

There were videos of other incidents of Trump supporters stopping traffic over the weekend, including one on New York City’s Whitestone Bridge on Sunday. After a supporter with the display name “Chump for Trump” tweeted “hope AOC isn’t using the Whitestone Bridge today there is a lot of traffic!” with video of backup, Congresswoman Alexandria Ocasio-Cortez responded “I took the Throggs Neck. I heard there was a pileup of chumps on the Whitestone.” 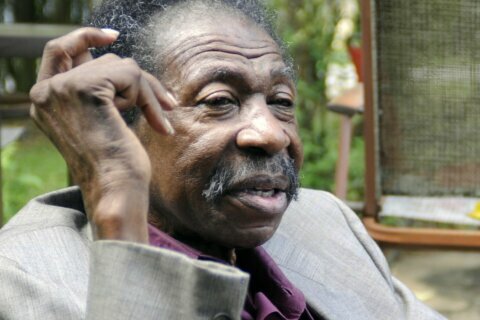