White cop not charged in Chicago-area killing of Black guard

CHICAGO (AP) — A white suburban police officer who fatally shot a Black security guard outside of the suburban Chicago bar where he was working will not be charged, prosecutors announced Friday.

The Cook County state attorney’s office said in a news release that it “concluded that the totality of evidence is insufficient to support criminal charges against Midlothian Police Officer Ian Covey” in the shooting death of Jemel Roberson.

Anticipating that the decision will be criticized by some who have been watching this case closely, State Attorney Kim Foxx said in the release that more than 100 witnesses were interviewed and physical evidence was examined by her office and the Illinois State Police’s public integrity task force.

“I am acutely aware in this age of civil unrest that police-involved shootings are viewed under a microscope, as they very well should be,” she said. “The death of Jemel Roberson is tragically heartbreaking, and while it might feel to some people like justice was not served here, I have both an ethical and legal obligation to make charging decisions based on the law and the evidence,” Foxx said.

“While this conclusion may not be the result that many have hoped for, I can assure you that this investigation was conducted with the highest level of scrutiny,” she said.

Roberson, who was 26 years old, was fatally shot by Covey in November 2018 outside of Manny’s Blue Room in Robbins, a predominantly Black community just south of Chicago. According to fellow security guard Dorian Myrickes, two groups at the bar got into a fight and were kicked out via separate doors before someone came back and opened fire, wounding four people, including Myrickes. No one was arrested in that attack, the Chicago Tribune reported.

Roberson was working as a security guard and, according to an attorney for his mother, was wearing a hat emblazoned with “security” across the front when he was fatally shot as he was trying to detain a suspect in a separate shooting that wounded several other people at the tavern.

Almost immediately, there were questions about whether race played a role in the shooting, with one suburban Chicago alderman, Keith Price, of nearby Harvey, complaining at the time that the officer “just sees a Black man with a gun and kills him.”

There were conflicting reports about what happened in the moments before Covey opened fire. Several witnesses told investigators that the officer fired despite people shouting that Roberson was a security guard. Myrickes, who was shot in the shoulder in the initial shooting, said he never heard Covey order Roberson to drop his weapon before he fired.

In an interview from his hospital bed after the shooting, Myrickes told The Associated Press that Roberson was holding a suspect at gunpoint when he was shot and was wearing a black sweatshirt with the word “Security” on the back of the shoulder. He acknowledged, though, that the officer might not have been able to see the lettering from where he was standing.

The State Police issued a statement at the time saying that Roberson was wearing “plain black clothing with no markings readily identifying him as a security guard.” The agency also said that witnesses told investigators that the officer did order Roberson to drop his weapon before he fired.

In Friday’s news release, Foxx did not detail the evidence that led her office to conclude that charges weren’t warranted.

A civil rights lawsuit against the officer and the community where he works was filed days after the shooting. It was not immediately clear if that lawsuit had been settled. 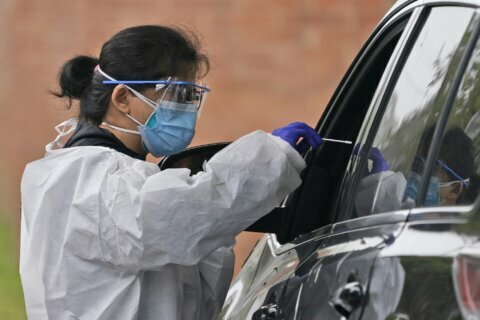