Hospitalizations, virus spread and deaths continued at high levels Tuesday in Iowa on the eve of a campaign rally by President Donald Trump, where Gov. Kim Reynolds and thousands of other Trump supporters will likely defy the governor’s own emergency proclamation to keep distance between people in public places.

Iowa remains under a public health emergency declared by Reynolds on March 17. It requires that organizers of mass gatherings “must ensure at least six feet of physical distance between each group or individual attending alone.”

The same social distancing requirement remains in effect for bars, restaurants, malls, casinos and performance venues, and Reynolds has empowered state agencies including law enforcement to enforce the restrictions.

When asked Monday if the proclamation pertains to the Trump rally, Reynolds’ spokesman said the Republican governor looks forward to attending and noting that gathering will take place outside. The spokesman said Reynolds will take precautions “and is encouraging those attending to adhere to the public health steps the campaign is taking such as temperature checks, and the use of hand sanitizer and masks.”

Trump campaign spokesman Tim Murtaugh said the event will be in an open-door airplane hangar, and temperature checks will be taken of all participants who will also be issued masks and instructed to wear them.

Photos and reporting from a Trump rally in Florida on Monday showed little apparent social distancing efforts, and most of those at the rally didn’t appear to be wearing masks. Trump, who was hospitalized with COVID-19 only a week ago, didn’t wear a mask while speaking.

Such images troubled Des Moines Mayor Frank Cownie, who said Monday he hopes Iowans take seriously the threat of a super-spread event that the rally poses if precautions aren’t taken. Cownie has imposed a city mask mandate, but Reynolds has said such local requirements aren’t enforceable.

Dr. Megan Srinivas, an infectious disease doctor who lives in Iowa and is a faculty member of the University of North Carolina, also expressed concern.

“I would say any type of rally that’s going to gather large groups of people, whether it’s a couple hundred or couple thousand, is one of the riskiest things we can do in the setting of the pandemic, and it will only propagate continued and increased spread of COVID not just in the area in which that rally occurred but throughout the state and all the small towns from which it’s participants came,” she said.

Srinivas, who serves as an unpaid adviser to a regional COVID-19 council for the Joe Biden campaign, said she was very concerned about the spread that she predicted will happen in three to five weeks after the rally.

A Trump campaign Facebook invitation to apply for tickets included a statement that said attendees “voluntarily assume all risks related to exposure to COVID-19 and waive, release and discharge” the Trump campaign from any liability.

Iowa on Tuesday posted a new record for the number of people hospitalized with COVID-19 at 463. The state posted another 580 new confirmed cases for a total of 100,632 positive cases. Another 17 people died in the last 24 hours, bringing the total death toll to 1,481.

Iowa had 230 deaths in September and 139 so far in October with 82 in the past week alone. A White House Coronavirus Task Force report from Oct. 4 indicated “community transmission has remained high across the state for the past month, with many preventable deaths.”

The report’s recommendations said “masks must be worn indoors in all public settings and group gathering sizes should be limited.”

Officials at Des Moines International Airport, where the rally will be held in a cargo hangar, have been told to plan for up to 10,000 people. 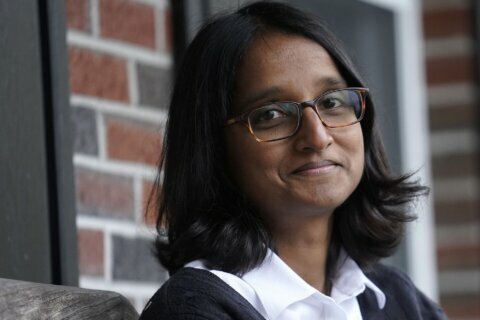