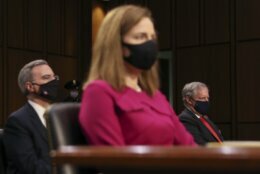 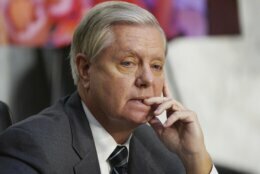 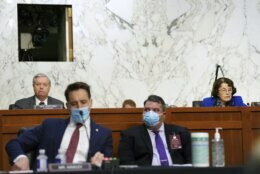 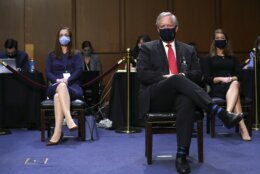 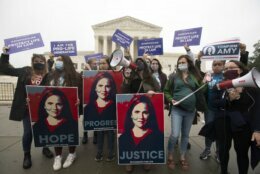 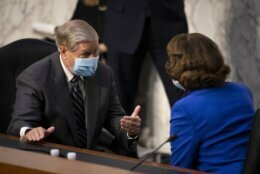 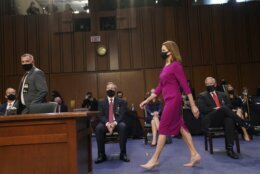 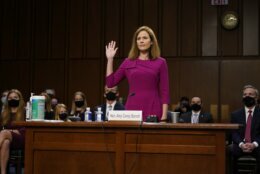 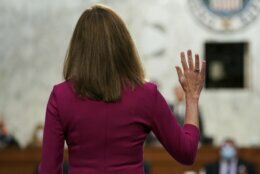 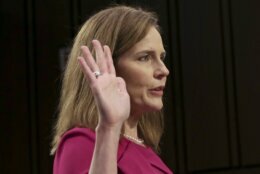 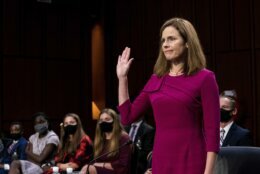 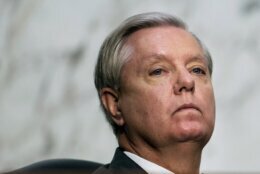 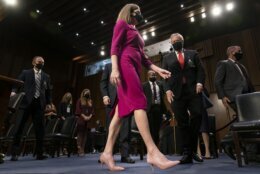 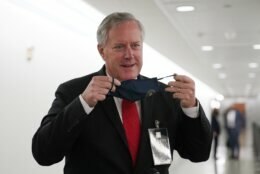 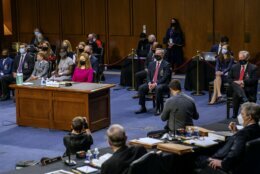 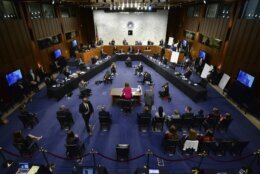 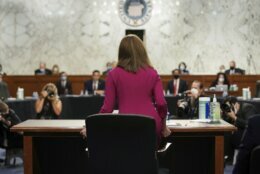 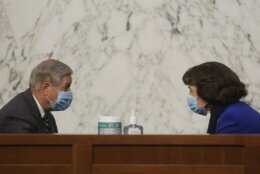 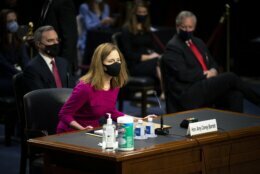 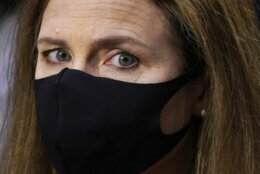 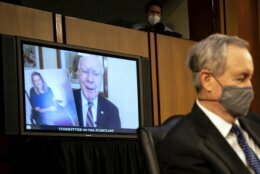 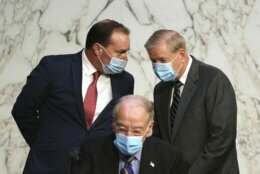 WASHINGTON (AP) — Supreme Court nominee Amy Coney Barrett presented her approach to the law as conservative and fair on Monday at the start of fast-tracked confirmation hearings, while angry Democrats, powerless to stop her, cast her as a threat to Americans’ health care coverage during the coronavirus pandemic.

With her husband and six of their seven children behind her in a hearing room off-limits to the public and altered for COVID-19 risks, Barrett delivered views at odds with the late Justice Ruth Bader Ginsburg, whose seat President Donald Trump nominated her to fill, likely before Election Day.

“Courts are not designed to solve every problem or right every wrong in our public life,” declared the 48-year-old federal appeals court judge, removing the protective mask she wore most of the day to read from a prepared statement.

Americans “deserve an independent Supreme Court that interprets our Constitution and laws as they are written,” Barrett told the Senate Judiciary Committee, laying out her judicial philosophy, which she has likened to that of her conservative mentor, the late Justice Antonin Scalia.

The Senate, led by Trump’s Republican allies, is pushing Barrett’s nomination to a quick vote before Election Day, Nov. 3, and ahead of the the latest challenge to the Affordable Care Act, which the Supreme Court is to hear a week after the election.

Republicans also hope to seat Barrett quickly enough to hear any legal challenges after the election. Sen. Richard Blumenthal of Connecticut was among several Democrats demanding that Barrett pledge not to take part in any election case. She has made no such commitment.

Barrett will face questions Tuesday after a day dedicated to opening statements.

Ginsburg’s legacy was felt throughout the hearing, with some Democrats wearing lapel pins with her likeness. Barrett also praised the liberal icon, saying she was “forever grateful” for Ginsburg’s trailblazing path as a woman on the court.

Testifying from her office because of the pandemic, Harris said that the court is “often the last refuge for equal justice” and that not only health care but voting rights, workers’ rights, abortion rights and the very idea of justice are at stake.

Barring a dramatic development, Republicans appear to have the votes to confirm Barrett to a lifetime seat on the Supreme Court, and they spent their time portraying her as a thoughtful judge with impeccable credentials. Her nomination offers the chance to entrench a conservative majority on the court for years to come with Trump’s third justice.

“She is a slam dunk” based on her qualifications, Sen. Lindsey Graham, R-S.C., the committee chairman, told reporters late in the day. Barrett received the highest, “well-qualified” rating from the American Bar Association, though she is the first nominee since Clarence Thomas who did not receive a unanimous assessment.

Underscoring the Republicans’ confidence, Graham set an initial committee vote on the nomination for Thursday, the last day of hearings, which would allow final approval by the panel for one week later and a vote for confirmation by the full Senate on Oct. 26.

One after another, Democrats sought Monday to tie her nomination to the upcoming Obama-era health care case.

“Health care coverage for millions of Americans is at stake with this nomination,” said Sen. Dianne Feinstein of California, the committee’s senior Democrat.

Sen. Sheldon Whitehouse, D-R.I., said the nomination is a “judicial torpedo aimed” at the law’s protection for people with preexisting health conditions. The Trump administration wants the court to strike down the entire law widely known as “Obamacare.” Barrett has criticized the court’s two earlier major rulings supporting the law.

Trump himself seemed to be watching, tweeting several times about the hearing. In one message, he tweeted that he’d have a “FAR BETTER” health care plan, with lower costs and protections for preexisting conditions. But he has not, as yet, discussed an actual health care plan.

Barrett’s religious views and past leadership role in a Catholic faith community pose a challenge for Democrats as they try to probe her judicial approach to abortion, gay marriage and other social issues without veering into inappropriate questioning of her faith.

Republican Sen. Josh Hawley of Missouri lambasted what he called a “pattern and practice of religious bigotry” by Democrats. However, Democratic senators made clear in advance of the hearing that they didn’t plan to question the judge on the specifics of her religious faith.

Democratic presidential nominee Biden, also a practicing Catholic, told reporters ahead of a campaign trip to Ohio that he doesn’t think “there’s any question about her faith.”

The Senate Judiciary Committee met on a federal holiday to kick off four days of hearings. Some senators took part remotely, after two committee Republicans, Mike Lee of Utah and Thom Tillis of North Carolina, tested positive for COVID-19 10 days ago.

Lee was present in the hearing room, bearing a doctor’s note saying he didn’t need to remain isolated. Tillis took part remotely, but his spokesman said he also was free of symptoms.

Graham opened the hearing acknowledging “the COVID problem in America is real.” But he said, “We do have a country that needs to move forward safely.”

Graham acknowledged the obvious: “This is going to be a long, contentious week.”

Protesters rallied outside the Senate buildings with the hearing room largely closed to the public. Capitol Police said 22 people were arrested and charged on suspicion of crowding, obstructing or other violations.

Faith and family punctuated Barrett’s testimony, and she said she would bring “a few new perspectives” as the first mother of school-age children on the nine-member court.

She said she uses her children as a test when deciding cases, asking herself how she would view the decision if one of her seven children were the party she was ruling against.

“Even though I would not like the result, would I understand that the decision was fairly reasoned and grounded in the law?” she said.

The hearing followed a White House event announcing her nomination just over two weeks ago, in which most of the audience did not wear masks. The event has been labeled a “superspreader” for the coronavirus.

More than two dozen people linked to the Sept. 26 Rose Garden event, including the two GOP senators, have contracted COVID-19. Barrett and her family went maskless at the event. She and her husband, Jesse, tested positive for the virus earlier this year and recovered, administration officials have said.

Democrats already were enraged that Republicans are moving so quickly, having refused to consider President Barack Obama’s nominee after Scalia’s death in February 2016, well before that year’s election.