COLUMBIA, S.C. (AP) — South Carolina’s governor promised on Thursday to do whatever the Marines need to keep open the training base at Parris Island after a top military official floated the idea of closing the base and building a new one elsewhere that would allow it to easily begin training men and women together.

Marine Commandant Gen. David Berger stunned the military-boosting state last week when he mentioned the possibility during an interview published on the Military.com website.

Berger also mentioned closing another base in San Diego, saying it might be easier to start from scratch than trying to make adjustments at each of the bases. The Marines face a five-year deadline for gender-integrated training at Parris Island and an eight-year deadline in San Diego.

“Nothing, the way we’re organized right now, lends itself to integrated recruit training,” the website quoted Berger as saying. “If that’s our start point — and it is — we have to get to a place on both coasts, or at a third location.”

A spokesman for Berger expanded on his comments to the website, saying while nothing had been decided, the Marines had to consider what would be the best way to spend its money.

“If you have to update a lot anyway, do you save manpower, resources and personnel by just combining the two into one?” Marine Maj. Eric Flanagan remarked.

South Carolina Gov. Henry McMaster brought commanders from every military installation in the state to the capital of Columbia on Thursday — and he had a leader from Parris Island talk first.

McMaster said the base “adds greatly to the character and strength, economic and otherwise, of this state.”

“Anything we can do to support your mission, we’ll do it,” the governor said.

Parris Island has been training Marines for 120 years on the island, located off the state’s southern coast. The base has problems aside from the challenge of making the necessary accommodations to train women alongside men, including rising sea levels and old buildings that need improvements. Marine Col. Ricardo Player told the governor that the military is spending $30 million to upgrade rifle ranges at the base.

Player stressed during the meeting that the Marines are looking at all options as it embarks on gender-integrated training, but he also acknowledged the state’s support, saying the Marines have always felt that South Carolina was willing to help them in any way possible.

“I think we’re all firing on the same target,” he said.

South Carolina leaders also indicated their willingness to go head-to-head with San Diego to be the base that survives. They noted that Marine recruits at Parris Island get all their training in one place, while San Diego requires two different facilities because of a lack of space.

“It’s clear to me Parris Island has all the advantages and none of the disadvantages,” McMaster said. “We’re looking forward to the presence and expansion on Parris Island.” 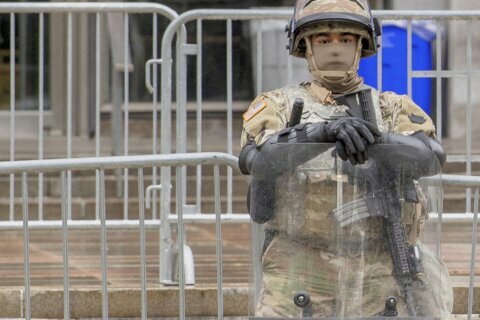