LIBERTY, Mo. (AP) — Missouri Gov. Mike Parson said Wednesday he “most certainly would” pardon a St. Louis couple if they are convicted of gun charges after waving guns at protesters walking in front of their home this summer.

Mark and Patricia McCloskey were indicted Tuesday on charges of unlawful use of a weapon and tampering with evidence arising from their confrontation with the demonstrators in their private neighborhood.

Parson had said earlier that he would pardon the couple and he repeated that pledge during a news conference Wednesday.

“We’ll let it play out and see how this all comes out in the courts, but I stand by what I said,” he said.

Protesters marching to St. Louis Mayor Lyda Krewson’s home were outside the McCloskeys’ $1.15 million home when the couple emerged with guns and waved them at the demonstrators while demanding they get off their property.

The McCloskeys have argued they were exercising their Second Amendment rights and defending their home from protesters who were threatening them. They have become heroes to conservatives and gun-rights advocates and drawn support from President Donald Trump.

Protest leaders have said the marchers were peaceful and did not threaten the couple.

Circuit Attorney Kim Gardner, a Democrat, charged the couple with felony unlawful use of a weapon. She said the use of guns risked bloodshed at what she called an otherwise peaceful protest. 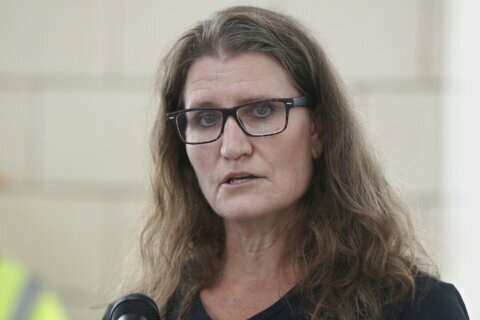 U.S. safety board: Lack of oversight by boat owner led to fire that killed 34 on California scuba diving excursion