LOUISVILLE, Ky. (AP) — Amy McGrath was in elementary school when Mitch McConnell was first elected to the Senate. Now, 36 years later, the Democrat who reached her dreams of becoming a military aviator has set her sights on a mission no one else has achieved — ending the Republican leader’s career.

The retired Marine combat pilot will have to overcome strong headwinds to deny McConnell a seventh term. While many Republican Senate candidates are scrambling to distance themselves from President Donald Trump, McConnell appears to be benefiting from his key role in executing the president’s agenda. McGrath, meanwhile, has labored to distance herself from the liberal wing of her party, a formidable challenge in a state where the Republican brand remains strong — especially with frequent reminders from McConnell.

“If she goes to Washington, the first vote she’ll cast in the Senate is to make Chuck Schumer from New York the majority leader, transferring the influence and power that Kentucky has now,” McConnell said at a Monday evening debate with McGrath.

While many Senate leaders lose support at home when they lead in Washington, McConnell, 78, the longest-serving senator in Kentucky history, is trying to use the power inherent in his position as an asset. His position allows Kentucky to “punch above its weight,” he argues. He leverages that influence, he says, to steer federal money to the state — a role he has long embraced even as he casts himself as a guardian against runaway federal spending.

McGrath says McConnell’s long tenure is precisely the problem. She supports term limits for senators and portrays McConnell as a creature of the “Washington swamp.” Borrowing Trump’s biting criticism to wield against his chief congressional ally, she adds: “You can’t drain the swamp until you get rid of the guy that built it.”

“Our country has never needed a new generation of leaders more than right now,” McGrath, 45, said at a recent campaign event. “We are more divided than ever. We are more partisan than ever. Our Congress is more dysfunctional than ever before.”

She says progress on health care, immigration and racial and economic justice issues won’t happen until McConnell leaves the Senate.

“The man who has perverted and poisoned our very own system is our senator,” McGrath said.

Other Democratic Senate candidates have been focusing on health care and the economy and gaining traction. But Kentucky’s demographics make statewide victories infrequent.

Republicans dominate the vast rural stretches of Kentucky. Democrat Andy Beshear found a winning formula in the state’s 2019 governor’s race by amassing huge margins in the cities of Louisville and Lexington while running strong in the suburbs and college towns, but Beshear also benefited from running against a Republican incumbent with self-destructive tendencies.

McConnell is renowned for being disciplined, saving his most biting comments for national Democrats who aren’t popular in Kentucky. And there may not be enough Black or suburban voters in the state to help McGrath topple the powerful incumbent.

For months, McConnell has crisscrossed the state touting the $13 billion share for Kentucky from the more than $2 trillion virus-relief package passed by Congress in March. It included aid to state and local governments, hospitals, schools and businesses and payments to individuals.

In late summer, McConnell unveiled a slimmed-down version of another relief package totaling about $500 billion, which stalled amid partisan wrangling over its size and scope. A $3 trillion bill passed by the Democratic House in May, he said, was “too much, too soon, and we needed to wait a little bit and see what we had already done, see how it affected the country.”

McGrath sees the lack of another aid bill as a failure by McConnell to help hard-hit Kentuckians. She said he waited too long and then presented an “unworkable bill and didn’t negotiate.”

“If you want to call yourself a leader, you’ve got to get things done,” McGrath said during their debate. “Those of us that served in the Marines, we don’t just point fingers at the other side. We get the job done.”

McGrath said McConnell is “perfectly willing to work overtime to ram through a Supreme Court justice, but he doesn’t want to help everyday people. It’s unbelievable.”

McConnell has teamed with Trump to reshape the federal judiciary, and now hopes to confirm Amy Coney Barrett quickly. He takes pride in his own political about-face from his refusal to hold hearings for the 2016 nomination of Judge Merrick Garland by former Democratic President Barack Obama, a turnabout critics see as rank hypocrisy.

McGrath says no confirmation vote should occur right before a presidential election. Last year, McGrath waffled on whether she would have voted to confirm Brett Kavanaugh to the Supreme Court. She initially said she would have voted to confirm, only to change her mind hours later, leading McConnell and his campaign network to dub her “Amy McGaffe.”

Health care has emerged as another flashpoint in the race.

McConnell has pushed to repeal the Affordable Care Act for years, while McGrath supports the Obama health care law, which provided health insurance for thousands of Kentuckians. She supports adding a public health insurance option and expanding access to Medicare for people 55 and older.

She’s attacked McConnell over the threat to the law, especially its protections for people with preexisting health conditions. McConnell says those protections will continue regardless of what the Supreme Court decides about the latest effort, backed by Trump, to strike it down.

“No one believes the Supreme Court is going to strike down the Affordable Care Act,” McConnell said during the debate.

Trump carried Kentucky by 30 percentage points in 2016 and is heavily favored to win the state again next month. Knowing she has to win over some Trump supporters, McGrath has largely avoided criticizing him. She says her time in the military taught her “what leadership is all about — character, honor, integrity.”

McConnell says the state shouldn’t trade him for a political “rookie.” He points to his ability to win federal money for opioid addiction recovery and national defense in a state with two sprawling Army posts.

During a summer stop in Owensboro for the unveiling of a memorial to Gold Star families along the city’s waterfront, redeveloped with the aid of tens of millions in federal money, McConnell basked in his appropriating prowess.

“I’m particularly proud you selected this location for this memorial,” McConnell said. “For many years, it’s been my privilege to work with you to develop this riverfront to showcase some of Owensboro’s best attributes.” 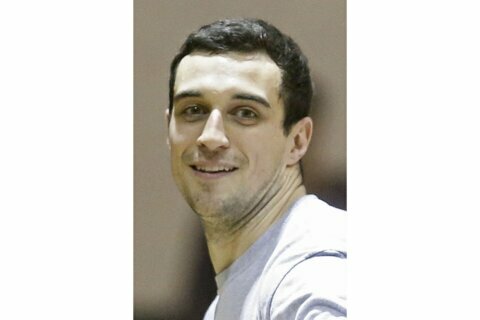 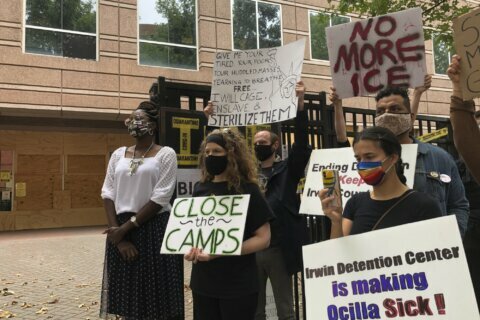