BATON ROUGE, La. (AP) — A Louisiana trooper accused of shooting a 19-year-old man in the back during a traffic stop two years ago has been indicted on charges of aggravated second-degree battery and illegal use of a weapon.

Clifton Scott Dilley, who sued Domingue, the department and the state last year in federal court, was present in a wheelchair when the indictment was handed up, the newspaper said.

He did not comment. But his attorney issued a statement that Dilley and his family were grateful for “this first step in the prosecution of Kasha Domingue.”

The bullet damaged a bone and the spinal cord in Dilley’s lower back, according to the lawsuit. Attorney Don Cazayoux has told news outlets that Dilley’s lower body is paralyzed.

“The family understands the difficulties associated with these prosecutions and also respects the jobs that the men and women in law-enforcement do every day to protect us and keep us safe from harm,” the statement said.

The police news release said Domingue was put on paid leave and troopers would arrest her once a grand jury warrant was issued. It said only that the shooting occurred during a traffic stop on July 10, 2018.

Dilley’s lawsuit accused Domingue of shooting him in the back and then lying about it. She first reported the incident with a radio code that indicated she had used a stun gun on him, delaying medical care, then said she shot him as he charged at her, according to the lawsuit.

A business surveillance camera recording showed “unequivocally that Trooper Domingue’s story of being attacked was completely false, and that she instead shot a fleeing, unarmed passenger of a car stopped for a minor traffic violation,” the lawsuit said.

State police said Domingue, who began working for the department in August 2015, was placed on desk duty after the shooting.

Colonel Kevin Reeves, the state police superintendent, said in the news release that Louisiana State Police began an immediate investigation into the shooting and has cooperated fully with the East Baton Rouge District Attorney’s Office.

“I remain confident in our investigative process. Through the judicial system, I expect a fair and just outcome to this incident,” Reeves said in the statement. 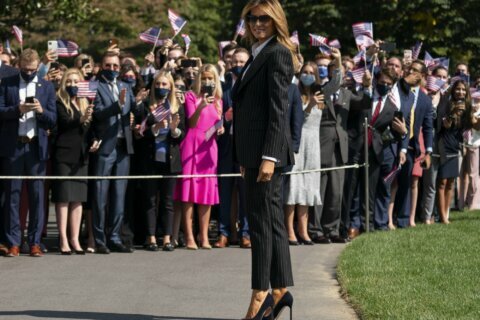 Melania Trump nixes campaign trip due to cough from COVID