DALTON, Ga. (AP) — Law officers have apprehended one of two Texas fugitives wanted after a Georgia deputy was shot during a traffic stop, the Georgia Bureau of Investigation said Tuesday.

Jonathan Hosmer, 47, is in custody, and Dalton Potter, 29, remains at large, the agency said in a statement.

The gunfire happened around midnight Monday in Dalton, Georgia, when Potter fired numerous gunshots at Whitfield County Sheriff’s Deputy Darrell Hackney from inside his vehicle, the GBI said. Hackney was struck, but his ballistic vest saved him, the GBI said in a statement. Authorities described Potter as “armed and dangerous.”

Potter had been hauling a stolen trailer and was pulled over by deputies around midnight when he opened fire, authorities said.

Hackney and another deputy returned fire, but Potter made his getaway by driving south on Interstate 75. He wrecked the truck and escaped into the woods on foot, the GBI said. The stolen trailer was found along the southbound lanes of I-75, near the Whitfield-Gordon county line, the agency said.

The GBI later said they were searching for a second Texas fugitive — Hosmer — who they said was also involved in the shooting. Authorities said charges were pending against Hosmer, who was spotted on surveillance footage taken near the site of the truck crash.

Dalton is about 90 miles (145 kilometers) northwest of Atlanta. 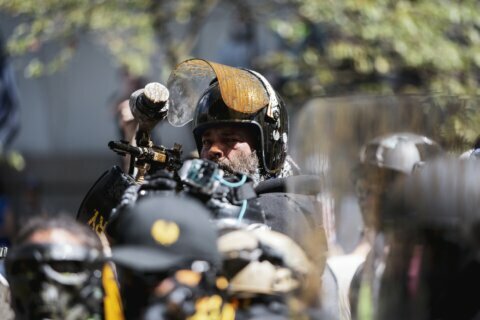