Funeral held for police detective killed in the line of duty

CLEVELAND (AP) — A Cleveland police detective killed in the line of duty along with a civilian last week was recalled Friday as a leader who proudly served on the force because he wanted to protect the city he grew up in.

A funeral service for Detective James Skernivitz was held at Rocket Mortgage Field House. Among those speaking at the event were city Police Chief Calvin Williams and U.S. Attorney General William Barr.

Skernivitz, 53, a married father of three and a 22-year member of the Cleveland force, was killed Sept. 3 along with Scott Dingess, 50, as they sat in the officer’s unmarked car during a drug operation on the city’s west side.

The shootings occurred during what authorities have said was an apparent attempted robbery, and happened a day after Skernivitz and other law enforcement officers had been sworn in at the Cleveland FBI office to become members of a federal anti-violence task force. Skernivitz was also assigned to the Cleveland police gang unit. Authorities have not said whether Skernivitz was working with the federal task force or the gang unit when he was killed.

David McDaniel Jr., 18, and two juvenile males, ages 15 and 17, have been charged with aggravated murder and other counts.

In a letter read on her behalf at the service, Skernivitz’s wife, Kristen, wrote that “Jim is a man no one will ever hold a candle to.” She also implored friends and family to live their lives as her husband did, with laughter and love, and urged everyone to “stop the hate, stop the violence, just stop.”

Several speakers noted that “Skern,” as he was known to family and friends, had a reputation as a jokester who ribbed fellow officers and kept things light despite being tasked with often dangerous work.

“What he did out there for our city was to try to lift not individuals, not neighborhoods, not groups, but an entire city to a higher, more noble life,” Williams said.

Barr praised Skernivitz for volunteering to work with the federal task force, saying the officer was “an American hero” who represented “everything great and good about our police.” He described him as the kind of person “critical to making a successful department work, and while he never asked for recognition, he earned it.”

Barr said that if any good could come from Skernivitz’s death, it is that residents realize the commitment police officers make during every shift they work. 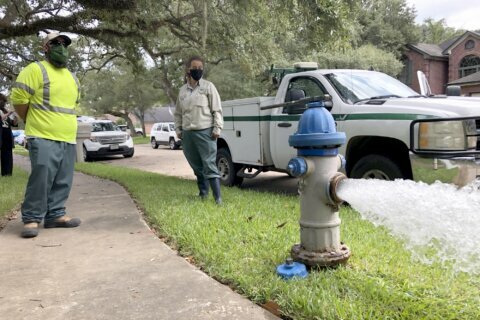