NEW YORK (AP) — Fox News Channel apologized on Monday “for any confusion” in reporting a now-debunked story about the mayor of Nashville, Tennessee, supposedly concealing the number of coronavirus cases linked to bars and restaurants in that city because they were so low.

The story came from a Thursday report by Nashville’s Fox affiliate WZTV on “leaked emails” that the station retracted late Friday upon learning that they didn’t mean what its reporter thought they did.

The story spread among national conservative commentators as a supposed example of the harm of coronavirus restrictions. It was the lead segment on “Tucker Carlson Tonight” on Thursday night and “Fox & Friends” devoted time to it the following morning.

A fact-check done Friday by The Nashville Tennessean debunked the WZTV reporting, which was retweeted by Donald Trump Jr. and led to Tennessee Sen. Marsha Blackburn, a Republican, to publicly call for an investigation into Mayor John Cooper, a Democrat.

The station’s story quoted an exchange between a Nashville health official and a representative of the mayor’s office, where the health expert sought and received assurance that coronavirus data linked to specific bars and restaurants would not be released to the public.

The mayor’s office later said that data was kept private for fear that it could inadvertently lead to the names of people who test positive for COVID-19 being revealed, a violation of federal privacy laws.

Meanwhile, the total number of cases linked to bars and restaurants in Nashville — about 80 in August — was actually publicly revealed at the time, contrary to the WZTV story.

WZTV’s news director, Bryan McGruder, did not immediately return a call seeking comment on Monday. But the station told CNN that “we incorrectly asserted that Mayor Cooper’s office withheld COVID-19 data from the public, which implied that there had been a coverup. We want to clarify that we do not believe there was any coverup, and we apologize for the error and oversight in our reporting.”

In his opening segment Thursday, Carlson called the station’s initial report a “remarkable” story offering “conclusive proof” that political leaders were lying about the coronavirus.

“Hide all good news — that’s the policy,” Carlson said, offering his opinion of political strategy. “Otherwise, the fear might subside and our power along with it.”

“Fox & Friends” host Brian Kilmeade said the next morning that Cooper “has to resign yesterday.”

He suggested that many Democratic leaders, if Joe Biden wins the presidency, would “hand the keys back to every bar and restaurant on Nov. 4.”

On Monday, Kilmeade’s co-host Steve Doocy, noted that the station Fox based its report upon had retracted the story. “We wanted to apologize for any confusion,” he said. 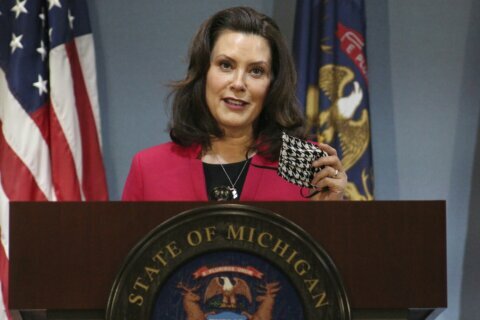