Board delays final decision on gun ban at Michigan Capitol

LANSING, Mich. (AP) — A board that oversees Michigan’s Capitol building on Monday put off making a final decision about whether to ban guns there, more than four months after armed protesters opposed to the governor’s coronavirus shutdowns entered the building.

The Michigan State Capitol Commission voted against two motions to ban all long guns and the open carrying of any gun at the Capitol, with commissioners saying they want to meet with lawmakers to discuss funding for enforcement before making a final decision. Both motions would allow law enforcement to still carry weapons.

In April, a number of protesters carrying guns took part in a protest at the Capitol against Democratic Gov. Gretchen Whitmer for closing down businesses due to COVID-19 concerns. Some came brandishing Confederate flags and swastikas outside the building. Some protesters with guns, which are allowed in the Statehouse, entered the Senate gallery and screamed outside the doors to the House chamber to be let inside.

Commissioner William Kandler said it’s a bad idea to try to form a policy without a plan or ability to enforce it.

“People can just flout it,” Kandler said “It’s a bad example they have a law and policy in place that is just ignored.”

Commission Chair Gary Randall said the commission plans to meets with Senate Majority Leader Mike Shirkey and Speaker of the House Lee Chatfield, both Republicans, about the possibility of appropriating funds to implement a gun ban.

“I know one of the criticisms that this commission has received is there seems to be an appearance that we are just trying to stall, or drag our feet on this issue. I can assure you that is not the case,” Randall said.

Commissioners John Truscott and Kandler examined the feasibility of banning guns, including looking at the costs of metal detectors, the flow of people through entrances, and coordinating with Michigan State Police. Their report did not include a recommendation.

Kandler said one significant concern is how to maintain the historical preservation of the building while accommodating the technology needed to implement a ban.

Anthony said when white supremacists look for a capitol to enter armed, they come to Michigan and when they look for someone to hurt, “they are targeting people who look like Rep. Carter and I.”

“The chandelier, this artwork, they have a value, but they are not more valuable than the lives of the people who work here, to my nieces and nephews who come here to learn about the history of this building, the men and women who tour this building,” Anthony said. “All of this can be replaced. A life cannot be replaced. By not banning firearms in this building you are telling me that my life does not matter.” 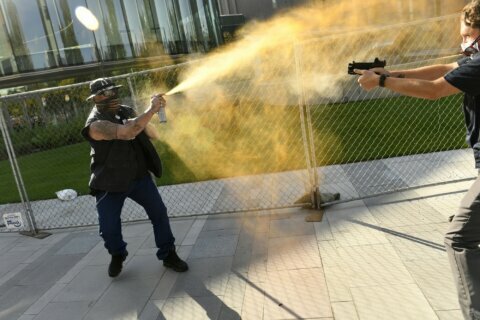