On August 2, 1776, members of the Second Continental Congress began attaching their signatures to the Declaration of Independence.

In 1610, during his fourth voyage to the Western Hemisphere, English explorer Henry Hudson sailed into what is now known as Hudson Bay.

In 1862, the Ambulance Corps for the Army of the Potomac was created at the order of Maj. Gen. George McClellan during the Civil War.

In 1922, Alexander Graham Bell, generally regarded as the inventor of the telephone, died in Nova Scotia, Canada, at age 75.

In 1980, 85 people were killed when a bomb exploded at the train station in Bologna, Italy.

In 1985, 137 people were killed when Delta Air Lines Flight 191, a Lockheed L-1011 Tristar, crashed while attempting to land at Dallas-Fort Worth International Airport.

In 1990, Iraq invaded Kuwait, seizing control of the oil-rich emirate. (The Iraqis were later driven out in Operation Desert Storm.)

In 2014, Dr. Kent Brantly, the first Ebola victim to be brought to the United States from Africa, was safely escorted into a specialized isolation unit at Emory University Hospital in Atlanta, where he recovered from the disease.

In 2016, President Barack Obama castigated Donald Trump as “unfit” and “woefully unprepared” to serve in the White House, and challenged Republicans to withdraw their support for their party’s nominee, declaring “there has to come a point at which you say ‘enough.’”

Ten years ago: President Barack Obama, addressing the Disabled American Veterans in Atlanta, said the U.S. would leave Iraq “as promised and on schedule,” portraying the end of America’s combat role in the 7-year war as a personal promise kept. Actor Lindsay Lohan was released from a Los Angeles jail after serving 14 days of a 90-day sentence for violating her probation in a 2007 drug case. The Washington Post Co. announced that billionaire Sidney Harman would buy Newsweek for $1 and assume the magazine’s debts.

Five years ago: The International Olympic Committee said it would order testing for disease-causing viruses in the sewage-polluted waters where athletes would be competing in the 2016 Rio Games, days after an Associated Press investigation revealed high counts of viruses directly linked to human waste in the waters. Inbee Park of South Korea rallied to win the Women’s British Open to become the seventh woman to win four different major championships.

One year ago: President Donald Trump’s pick for national intelligence director. Texas Rep. John Ratcliffe, withdrew from consideration amid questions about his experience and qualifications. An administrative judge recommended firing a New York City police officer over the 2014 chokehold death of a Black man, Eric Garner. (The officer, Daniel Pantaleo, was fired.) R&B singer R. Kelly pleaded not guilty in New York to federal charges of abusing women and girls who attended his concerts; he was then returned to Chicago, where he’d been in custody in a separate case accusing him of engaging in child pornography. The United States officially withdrew from a landmark arms control agreement, the Intermediate-range Nuclear Forces treaty with Russia, and the Trump administration announced plans to test a new missile. 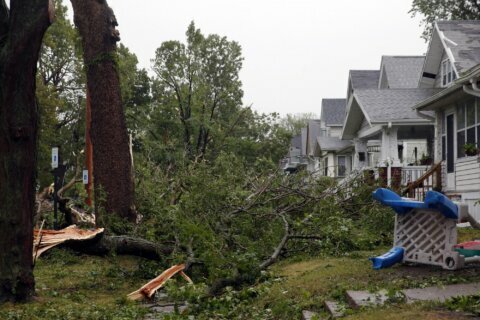