BATON ROUGE, La. (AP) — U.S. Sen. Bill Cassidy announced Thursday that he has tested positive for the coronavirus and is experiencing some COVID-19 symptoms. He said he is quarantining in Louisiana.

The Republican senator, 62, who is running for reelection on Nov. 3, is experiencing “mild symptoms that began this morning,” from COVID-19, the illness caused by the virus, his spokesperson Cole Avery said. Cassidy is at least the 13th member of Congress known to have tested positive for the coronavirus and only the second senator.

Cassidy, a physician from Baton Rouge who regularly wears a mask when in public and on Capitol Hill, said in a statement that he was tested after being notified Wednesday night that he’d been exposed to someone infected with the virus. The senator said he is adhering to medical guidance and notifying people with whom he may have come into contact.

“I am strictly following the direction of our medical experts and strongly encourage others to do the same,” he said.

A few hours later, the senator posted a short video on Twitter to “thank folks for their concern and to let them know I’m OK.” He also made a pitch for his legislation seeking more money for coronavirus testing.

Cassidy’s announcement came a day after he was in north Louisiana, visiting a veterans hospital in Shreveport, where he posted a photo with an official from the facility.

His positive test comes as some Senate Republicans have pressured Majority Leader Mitch McConnell to boost testing for senators. McConnell and House Speaker Nancy Pelosi have remained firm that there should be no special access for lawmakers as long as the general public doesn’t have widespread workplace testing. They have both said that equipment and tests should instead be directed to front-line workers.

McConnell has also said he doesn’t see the need for mask mandates in the Senate, where work spaces are more spread out and most members and staff have faithfully worn masks. In July, Pelosi and Capitol officials set broad new mask mandates after a Republican who had been walking the halls without a mask tested positive.

Kentucky Sen. Rand Paul, was the first senator to contract the virus. He received a positive test in March but was asymptomatic. Paul, who is also a doctor, has since refused to wear a mask on Capitol Hill because he says he has already had the virus. It is not yet clear whether a person can contract the virus again.

Cassidy faces 14 opponents on the November ballot but is favored to win election to a second term in a deep red state where he has the backing of President Donald Trump and a $6 million campaign account. His highest-profile opponent is Shreveport Mayor Adrian Perkins, a Democrat. 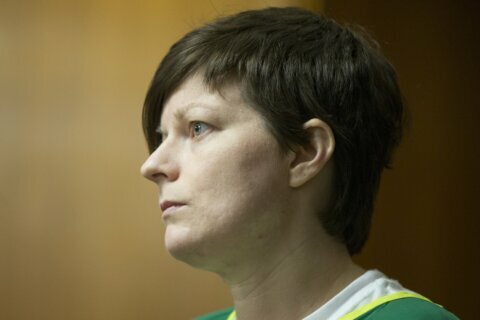