The Navy said Monday that it is investigating a pair of videos that show a demonstration of military dogs attacking a man wearing a Colin Kaepernick jersey as a prop. The videos are from a 2019 fundraiser at the National Navy SEAL Museum in Florida, according to CBS Miami.

“The inherent message of this video is completely inconsistent with the values and ethos of Naval Special Warfare and the U.S. Navy,” the military branch said in a statement. “We are investigating the matter fully, and initial indications are that there were no active duty Navy personnel or equipment involved with the independent organization’s event.”

The Navy said they became aware of the videos Sunday, after they were posted to social media by director Billy Corben.

In one video, three dogs are seen attacking a man wearing protective gear underneath a Kaepernick jersey as part of a demonstration. A man narrating the event refers to one of the dogs, named Raven, as “the museum’s mascot.”

According to the museum’s website, Raven is a four-year-old Belgian Malinois trained by Canada-based breeding company Baden K-9. The museum’s site also states Raven “is onsite during the facility’s working hours with his handler.”

In a second video, after the dogs are called off, the man in the jersey appears to say something like “oh man, I’ll stand,” which prompts a chuckle from the crowd.

Kaepernick, a former quarterback with the San Francisco 49ers, famously began kneeling during the national anthem before NFL games in 2016. The decision sparked controversy, as some, including President Trump, accused Kaepernick of being disrespectful to the country. Kaepernick stated he was kneeling as a form of protest against police brutality and racial injustice.

Many athletes around the globe now kneel during or prior to the national anthem, especially in the wake of the police killing of George Floyd. While the practice is more widely accepted now than it was when Kaepernick began taking a knee, Mr. Trump continues to speak out against it.

Kaepernick has not played in the NFL since the end of the 2016 season, when he became a free agent. 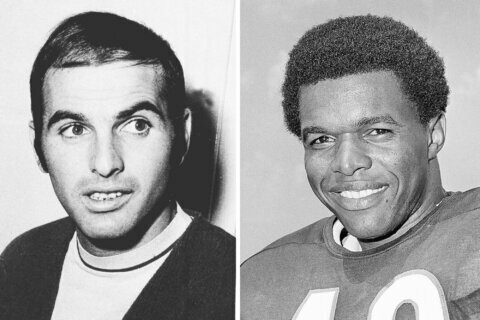 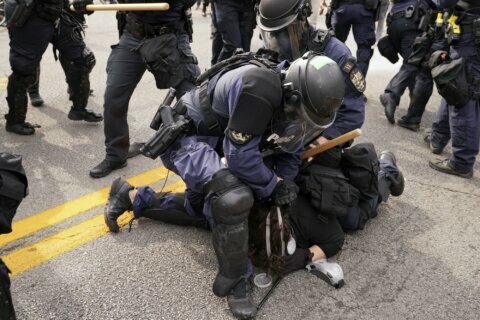