PHOENIX (AP) — Navajo Nation President Jonathan Nez has asked President Donald Trump to commute the death sentence of a Navajo man convicted in the 2001 killing of a fellow tribal member and her 9-year-old granddaughter.

Nez cited the tribe’s longstanding opposition to the death penalty in a July 31 letter to Trump that asks for the sentence of Lezmond Mitchell, the only Native American on federal death row, to be reduced to life in prison. Tribal officials and even the victims’ family opposed his death penalty, despite the grisly nature of the killings.

Nez, who was scheduled to appear Tuesday before the U.S. pardon attorney in Washington in support of clemency for Mitchell, wrote that Navajo cultural teachings stress the sanctity of life and instruct against the taking of life for vengeance.

“This request honors our religious and traditional beliefs, the Navajo Nation’s long-standing position on the death penalty for Native Americans, and our respect for the decision of the victim’s family,” Nez wrote in the letter to Trump, a vocal proponent of the death penalty.

Mitchell is scheduled to be executed on Aug. 26 at the Federal Correctional Complex in Terra Haute, Indiana, where he’s being held. He was among the first male inmates scheduled to be put to death after the U.S. Justice Department announced last year that the federal government would resume executing death row inmates for the first time since 2003.

The Justice Department carried out three executions last month. In addition to Mitchell’s execution, three other men are scheduled to be put to death in August and September.

His lawyers are seeking a stay of execution in federal court in Phoenix and making the clemency request to Trump through the U.S. pardon attorney in Washington.

Mitchell fatally stabbed Alyce Slim, 63, and then forced her 9-year-old granddaughter to sit beside her grandmother’s lifeless body as he drove about 40 miles (64 kilometers), before he slit the young girl’s throat. Their beheaded, mutilated bodies were found in a shallow grave on the reservation. Mitchell stole the woman’s car and later robbed a trading post in Red Valley, Arizona.

American Indian tribes for decades have been able to tell federal prosecutors if they want a death sentence considered for certain crimes on their land. Nearly all have rejected that option. Mitchell was convicted of carjacking resulting in death — a crime that carries a possible death sentence no matter where it happens, meaning the tribe had no avenue to object.

The U.S. Justice Department, which is arguing against delaying the execution, declined to comment on the clemency request. 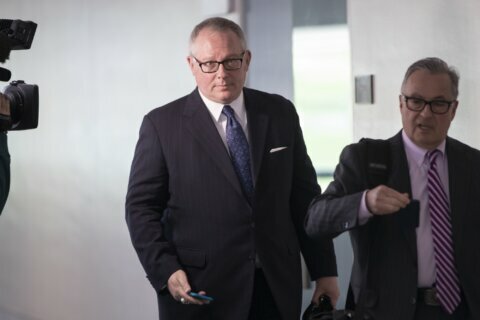