AUSTIN, Texas (AP) — In a unanimous vote, the Austin City Council moved Thursday to cut about one-third of next year’s $434 million police budget amid national calls for “defunding” law enforcement agencies in favor of spending more money on social services.

That will come to just over $150 million that will be redirected to social services in the 2021 fiscal budget, which starts Oct 1.

Beginning in October, about $21 million will fund social services, community resources including response to the coronavirus, mental health aid programs, violence prevention, victim services and food, housing and abortion access. Another $80 million will be redistributed to similar city services throughout the year, and $49 million will be spent on city’s Reimagine Safety Fund, which aims to provide alternative forms of public safety and community support besides policing.

Austin Police Chief Brian Manley said during a press conference after the vote that the budget cuts and plans to re-imagine the city’s policing would lead to changes unlike anything he had seen in his 30 years of working at the police department.

The cuts will eliminate about 150 open jobs, which would put staffing levels the same as in 2015, Manley said. The priority would be to keep the patrol unit, which responds to 911 calls, fully staffed. He said the department plans to allocate officers accordingly.

Three cadet classes also will be delayed, Manley said, and the department is coming up with alternative plans until cadets can begin their training. Those will include temporary jobs in police department that will give them a salary until they can start as cadets.

Austin Councilman Gregorio Casar, one of the main proponents of cutting the police budget, called the move “unprecedented in Texas” and praised the decision following the vote.

“Extreme, anti-civil rights voices will try to send us backward and are already working (to) mislead people about this vote,” Casar said on Twitter. “But today, we should celebrate what the movement has achieved for safety, racial justice, and democracy.”

The Austin Police Association, which advocates for Austin officers, criticized the proposal ahead of the vote.

“The council’s budget proposals continue to become more ridiculous and unsafe for Austinites,” the group tweeted. “They are going to ignore the majority who do not want the police defunded.”

Texas Attorney General Ken Paxton criticized the budget cut as another outgrowth of “cancel culture and asked Austin leaders to reconsider the decision.

“The city council’s action to slash funding disregards the safety of our capital city, its citizens, and the many guests who frequent it,” Paxton said in a statement. “The City of Austin already struggles to combat widespread crime, violence and homelessness.”

The move comes after weeks of protests against racial injustice and police brutality in Austin that began afther the May death of George Floyd. Austin protesters have also called attention to the death of Mike Ramos, a Black and Hispanic man who was shot by an Austin police officer in April and Garrett Foster, a protester who was shot during a Black Lives Matter protest by a civilian.

Manley vowed in June to no longer allow police to use less lethal munitions against crowds protesting under first amendment protected speech. Austin council members voted to ban the use of choke-holds and and limit the Austin police budget.

Calls to defund police departments across the nation have grown over the last two months, following outcry over the deaths of Floyd, Breonna Taylor and Ahmaud Arbery and police uses of force during protests over racial injustice and police brutality.

In Minneapolis, where George Floyd died, a majority of Minneapolis City Council members said in June that they supported disbanding the police department. But on August 5, a Minneapolis commission said they would need more time to review the city council proposed amendment to dismantle the police department citing legal concerns and missing information. The commission’s decision ended the possibility for the amendment to be on the November ballot.

Coronado is a corps member for the Associated Press/Report for America Statehouse News Initiative. Report for America is a nonprofit national service program that places journalists in local newsrooms to report on undercovered issues. 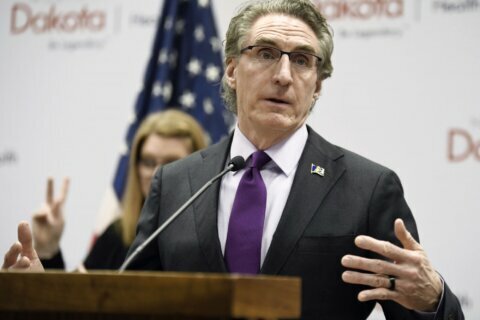