LAKE CHARLES, La. (AP) — Hurricane Laura was a monster storm that could have, even should have, wreaked much more…
Listen now to WTOP News WTOP.com | Alexa | Google Home | WTOP App | 103.5 FM

LAKE CHARLES, La. (AP) — Hurricane Laura was a monster storm that could have, even should have, wreaked much more destruction than it did, except for a few lucky breaks and some smart thinking by Gulf Coast residents, experts say.

Just before striking Louisiana, Laura wobbled. It wasn’t much, maybe 15 miles (24 kilometers) for a Category 4 storm that was nearly the width of two states. But it was enough to move the worst of the storm surge east of Lake Charles and into a far less populated area.

And even before that, Laura threaded a needle between well-populated New Orleans, Port Arthur and Houston and came ashore in Cameron Parish, which is the second least-populated county along the coast. The population of the average Atlantic and Gulf Coast county is 322,000 people. Cameron Parish has less than 7,000.

Before Laura struck, local governments and residents took the right steps and got out of harm’s way for the most part, a veteran New Orleans disaster expert said.

The storm was still devastating, but not quite as catastrophic as it might have been.

Lauren Sylvester heeded the mandatory evacuation, leaving her townhouse in Lake Charles on Wednesday to stay with her mom in New Iberia. Between the evacuation order and the storm surge projections, she didn’t want to take a risk.

“On the TV, the picture kept getting worse and worse. They said it was going to be 9 feet and above. It was freaking me out so much,” Sylvester said Friday. “I didn’t want to be stuck in my attic with no way to get out.”

She came home to some lost shingles and downed trees. There was no water damage.

“We got really lucky,” she said. “We were really blessed.”

Lawrence “Lee” Faulk of nearby Grand Lake, a member of the Cameron Parish governing body called a police jury, said if the storm had been 10 miles (16 kilometers) to the west, “Lake Charles and this part of the parish would have got all that water.”

National Hurricane Center storm surge specialist Jamie Rhome referred to the storm’s last-minute course change as the “little wobble that saved” Lake Charles. In the end, the city got maybe half the storm surge it could have received, he said.

The worst storm surge is to the east of a hurricane’s eyewall because of the combination of the storm’s counterclockwise whirl and northward movement. As Laura wobbled more to the east, Lake Charles got the eyewall, and the worst surge hit farther east in the marshlands, Klotzbach said.

Before the storm arrived, the hurricane center warned of up to 20 feet (6 meters) of storm surge, and Rhome said it was in that ballpark.

Storm surge warnings and estimates represent the most reasonable bad scenario, or the worst 10% of the thousands of calculations meteorologists make, Rhome said.

Emergency managers use those figures to get their evacuation messages across properly, said hurricane expert Brian McNoldy of the University of Miami.

Much like the now-forgotten Hurricane Bret that hit Texas in 1999, the location where Laura came ashore also made a big difference, he said.

“There aren’t that many lowly inhabited places along the coastline, and it managed to find one of them,” McNoldy said.

Another factor was simply smart behavior by the local population, experts said.

Shirley Laska, a sociologist who studied Louisiana disasters at the University of New Orleans and co-founded the Lowlander Center, said parish leaders, emergency managers and citizens did the right thing before the storm.

“I’m pretty much a cynic and a critic, but I think these parishes did wonderfully. And I mean both the citizens and the leaders,” Laska said. “But they got out of Dodge. They evacuated as they were told.”

Elizabeth Griffin Tietjens, a veterinarian in Calcasieu Parish, Louisiana, fled her house on Monday after hearing repeated warnings about Laura. She drove 12 hours to be with her husband at Fort Benning in Columbus, Georgia. Upon her return Friday, she found huge wind-torn gaps in the roof of her home.

Her landlord, Kevin Pickett, and his entire family fled too.

“Everybody left, everybody learned their lesson during (2005’s Hurricane) Rita,” Pickett said, “and so everybody vacated.”

Laska said she believes the monthslong pandemic helped make everyone more attentive to risk. Add to that Tropical Storm Marco, which threatened the region only a few days earlier and then fizzled. People were prepared well ahead of time.

Danny Lavergne, director of the Cameron Office of Emergency Preparedness, acknowledged that Laura inflicted the worst damage the area ever got. But, he said, “There’s nobody missing, no one injured, no one dead.” Most of the 150 to 200 people who refused to evacuate were on the western end of the parish.

“They survived the wind because there was no water,” Lavergne said.

Follow Seth Borenstein on Twitter at @borenbears, Melinda Deslatte at @MelindaDeslatte, John Mone at @JohnMone and Janet McConnaughey at @JanetMcCinNO. 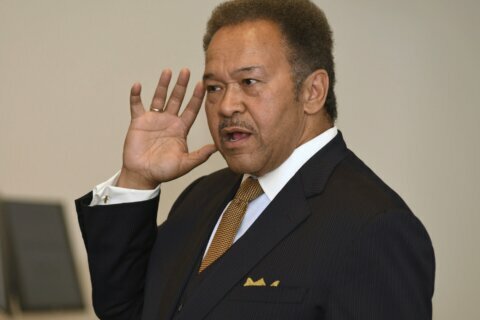