RUTH BADER GINSBURG, 1933-2020: Trump pledges woman for court, pushes Senate to move on pick | How Ginsburg's death could reshape the election | How to honor RBG by supporting her favorite causes
Home » National News » Oakland to pay $32.7…

The city of Oakland has reached a $32.7 million settlement of the lawsuits filed over the disastrous Ghost Ship warehouse fire in 2016.
Listen now to WTOP News WTOP.com | Alexa | Google Home | WTOP App | 103.5 FM

The city of Oakland has reached a $32.7 million settlement of the lawsuits filed over the disastrous Ghost Ship warehouse fire in 2016. The Oakland City Council authorized the settlement on behalf of 32 of the 36 people who lost their lives when the fire swept through an illegal party inside the cluttered 10,000-square-foot warehouse on the night of December 2, 2016.

CBS San Francisco said a press release from the city of Oakland noted that the settlement will be allocated with $23.5 million for the families of the fire victims who perished, and $9.2 million for plaintiff Sam Maxwell, who survived the fire but will live with severe, lifelong injuries and major medical expenses.

“This was a horrific tragedy that deeply impacted every corner of our community. Mayor Schaaf, the City Council, City Attorney and City Administrator express their deepest sympathies to Mr. Maxwell and the families, whose losses are unimaginable,” read a statement from the city. “The City continues to assert, as the agreement provides, that it is not liable for these tragic losses. The City decided to settle this case because of the cost-benefit analysis. The City’s total insurance coverage is $22 million.” 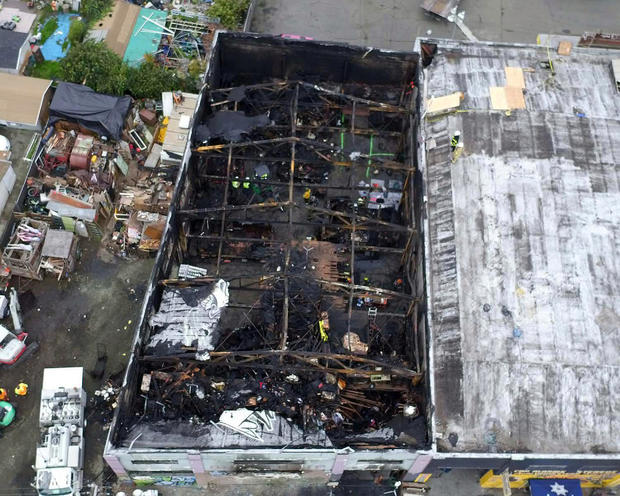 This undated file photo provided by the City of Oakland shows the burned warehouse after a deadly fire broke out on December 2, 2016, in Oakland, California.

The retrial of the criminal case against Ghost Ship master tenant Derick Almena is scheduled to begin in October 2020. Almena was released from Santa Rita Jail in May after his bail was reduced due to the coronavirus pandemic.

Almena, 49, is charged with 36 counts of involuntary manslaughter for the fire. A lengthy trial for Almena and co-defendant Max Harris, the warehouse’s artistic director, ended last September with jurors deadlocked 10-2 in favor of convicting Almena and acquitting Harris of all charges. Harris was released from custody later that day.