Barr to testify Portland protests are ‘an assault on the government’

Attorney General William Barr plans to tell the House Judiciary Committee that the violent unrest in Portland is “an assault on the Government of the United States,” according to a copy of his prepared remarks obtained by CBS News. In the remarks, Barr also accuses Democratic members of the House Judiciary committee of trying to “discredit” him.

“To state what should be obvious, peaceful protesters do not throw explosives into federal courthouses, tear down plywood with crowbars, or launch fecal matter at federal officers. Such acts are in fact federal crimes under statutes enacted by this Congress,” Barr says.

Barr will appear in front of the committee on Tuesday for an oversight hearing. In his opening remarks, he discusses the unrest that has followed George Floyd’s death — but while he acknowledges that “every instance of excessive force is unacceptable and must be addressed,” he decries calls to defund the police, saying “the demonization of police is not only unfair and inconsistent with the principle that all people should be treated as individuals, but gravely injurious to our inner city communities.”

“I think it would be an oversimplification to treat the problem as rooted in some deep-seated racism generally infecting our police departments,” Barr says of the treatment of African Americans by police. “It seems far more likely that the problem stems from a complex mix of factors, which can be addressed with focused attention over time. We in law enforcement must be conscious of the concerns and ensure that we do not have two different systems of justice.”

But while the department’s civil rights division is investigating the circumstances of Floyd’s death, Barr uses the remarks to denounce the acts of “senseless havoc and destruction” that he says have drowned out the call to address police violence against the African American community. 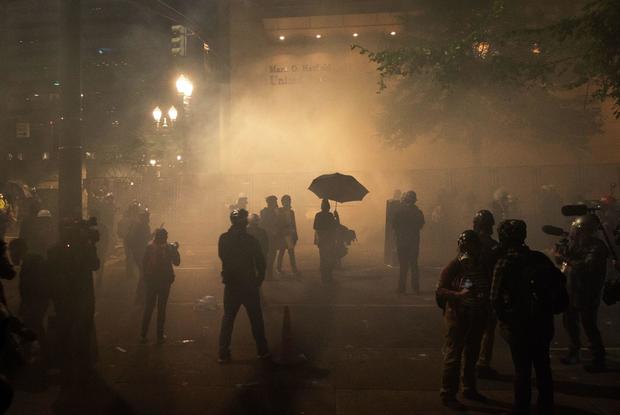 Protesters are surrounded by tear gas near the Mark O. Hatfield federal courthouse in downtown Portland as protesters take part in a rally against police brutality in Portland, Oregon late on July 24, 2020.

“Largely absent from these scenes of destruction are even superficial attempts by the rioters to connect their actions to George Floyd’s death or any legitimate call for reform. Nor could such brazen acts of lawlessness plausibly be justified by a concern that police officers in Minnesota or elsewhere defied the law,” Barr says in the remarks.

He also specifically asks members of Congress to not encourage “violent rioters and anarchists” in Portland, where protests have morphed into a violent clash with federal agents sent to the city.

“As elected officials of the federal government, every Member of this Committee – regardless of your political views or your feelings about the Trump administration – should condemn violence against federal officers and destruction of federal property,” Barr says. “To tacitly condone destruction and anarchy is to abandon the basic rule-of-law principles that should unite us even in a politically divisive time.”

Barr is expected to be asked about his role in the evacuation of protesters from Lafayette Square in June. Soon after the park was cleared, the president walked out of the White House to take a photo outside St. John’s Church. The attorney general has previously defended pushing back the protesters, saying officials had decided to move the perimeter well before the president walked across the lawn.

The Justice Department’s inspector general is currently investigating incidents involving excessive force by officers in both D.C. and Portland.

In his prepared statement, the attorney general also calls out the majority’s motivation for holding the hearing, and rebukes accusations that he kowtows to the president.

“Ever since I made it clear that I was going to do everything I could to get to the bottom of the grave abuses involved in the bogus ‘Russiagate’ scandal, many of the Democrats on this committee have attempted to discredit me by conjuring up a narrative that I am simply the president’s factotum who disposes of criminal cases according to his instructions,” Barr says.

While he does not mention the cases by name in his opening remarks, it is expected that Barr will also be asked to explain the department’s decision-making processes for Roger Stone and Michael Flynn, both of whom were charged in connection to Special Counsel Robert Mueller’s Russia investigation. 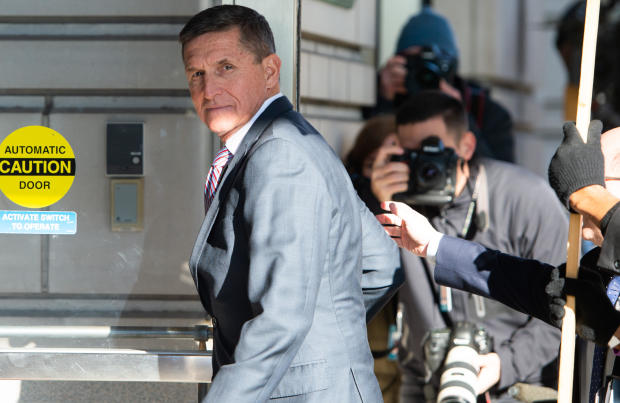 In May, the Department moved to dismiss the criminal case against Flynn, who originally pleaded guilty to lying to the FBI. The federal judge overseeing the matter did not immediately grant the department’s request, and the case is still being litigated.

Earlier this month, the committee heard from one of the prosecutors in Stone’s case, Aaron Zelinsky. Zelinsky was one of the four prosecutors who removed himself from the case after the DOJ interfered at the sentencing stage, asking the judge for less prison time.

Barr will be testifying in front of the committee for the first time tomorrow, after the hearing was postponed in March due to the coronavirus. Last year, the committee voted to hold him in contempt after not complying with subpoenas for documents related to the Mueller report.