The White House said Monday that some states are requesting far more medical supplies than they need to fight the coronavirus pandemic, pushing back against criticism that the distribution of vital equipment has been chaotic.

As the crisis has spread across the U.S., several governors have complained that they have not been receiving the protective gear and lifesaving ventilators they have requested. On a call with governors Monday, Trump administration officials blamed miscalculations by the states for missteps in how supplies have been distributed.

“In some cases, people are requesting 10 times what they actually need,” White House adviser Jared Kushner said, according to audio obtained by The Associated Press.

He said the problem isn’t a lack of medical supplies in the country overall, but rather that they aren’t all where they need to be. He urged governors to speak with hospitals to gather data on “what they’re actually using” before requesting equipment.

Oregon and Washington, for example, have sent virtually all the ventilators they received from the federal stockpile to New York — which is currently the epicenter of the U.S. outbreak.

It’s not clear what criteria states are using to arrive at their requests, but data collected from the states by The Associated Press suggests the distribution system has been marked by extreme inconsistencies in those asks — and in the subsequent deliveries. That raises questions about whether the equipment has been distributed where it was most needed as the virus spread across the U.S.

Colorado, for example, asked the federal government for 4.5 million masks — nearly nine times as many as Pennsylvania, a state with more than twice the population and more than twice as many confirmed cases. Colorado received just over 500,000 of them — 188,000 more than Pennsylvania.

Meanwhile, Virginia requested 2.2 million respirators for health care workers, while neighboring North Carolina, with slightly more people and about the same number of confirmed cases, asked for just 501,000. North Carolina has received less than half what it requested, but still far more than Virginia.

Oklahoma, which has relatively few cases so far, received more masks than it requested and slightly more than Louisiana, one of the hardest-hit states.

Illinois Gov. J.B. Pritzker, who has frequently sparred with President Donald Trump, objected to the idea that states may be asking for too much. He said the federal government had supplied 368,000 N95 masks and 693,000 gloves, but over the course of 10 days, he said the state goes through 1.5 million N95 masks and 25 million gloves.

“To anyone who wants a response to some of the blame-shifting coming out of the White House, all I have to say is, look at the numbers,” Pritzker said.

Rep. Bennie G. Thompson said confusion from the White House has hindered the Federal Emergency Management Agency’s ability to do its job.

“It’s been weeks since the federal government has mobilized its effort to get much-needed supplies to the states, but it continues to be chaotic and states are still struggling to get supplies they request from the federal stockpile,” the Mississippi Democrat, who is chairman of the House Homeland Security Committee, said in an emailed statement.

By Monday, it seemed the federal government was trying to better align the shipments of supplies with demonstrated need and began releasing reports showing how much it had delivered to certain states.

In a written response to questions, FEMA said all states and territories had received some gear but that it was prioritizing “high transmission areas” based on population and not on quantities requested by the states.

It said the majority of the nation’s stockpile had gone to hot spots, with most of it directed to the region including New York, New Jersey and Connecticut.

That would be welcome news to Connecticut Gov. Ned Lamont, a Democrat, who has been urging the White House for weeks to consider his state. Fairfield County — on the New York border — has been hit hard.

“I’m really happy that they’re talking about the tristate region, the New York metropolitan area, thinking about the hot spot,” he said, noting that Connecticut has received just 50 of the 1,500 ventilators it requested. “We’re in this together, but we do need more support there.”

Michigan’s Democratic governor, who has been among the most vocal critics of the supply chain, also noted things appeared to be improving. On Monday, a document provided to The Associated Press by the State Emergency Operations Center said Michigan had received just a small number of the N95 masks, gloves and gowns it had requested as of Sunday.

But in a news conference a short time later, Gov. Gretchen Whitmer said the federal government was sending 1.1 million surgical masks, 232,000 face shields, 2 million gloves and will be shipping 1 million more N95 masks this week to the Detroit area — a hot spot. The state previously received 700 of the 26,000 ventilators it had requested.

“We’re making some progress, and that it’s a good thing. But we need more (protective gear) to continue fighting this virus,” Whitmer said. 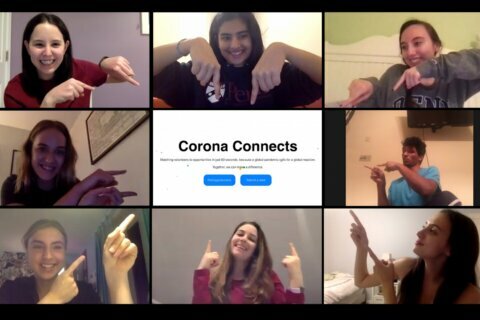 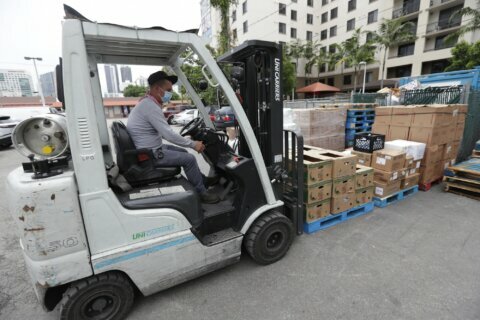 US productivity falls at 0.9% rate in first quarter