SALEM, Ore. (AP) — Republican senators slipped out of the Oregon State Capitol on Monday, preventing the state Senate from convening in an attempt to doom a bill aimed at stemming global warming.

The walkout was a repeat of action the GOP took last year to kill similar climate change legislation, a maneuver that prompted threats of having state police forcibly return lawmakers to the Statehouse.

The walkout threatens to derail the main legislation that Democrats had hoped to pass during a 35-day session: A bill to limit greenhouse gas emissions that threaten the planet.

Democratic Gov. Kate Brown accused the Republican lawmakers of “being against the Democratic process.” The minority Republicans staged two walkouts last year, leading Senate President Peter Courtney to request Brown to order the state police to bring the missing lawmakers back. This time, though, Courtney said he won’t involve the state police.

A few large trucks supporting the Republicans drove around the Oregon State Capitol, blowing their horns. After Courtney announced on the Senate floor that not enough senators were present to convene Monday’s session, several people in an upper gallery clapped. Courtney said he would order police to expel them if they persisted.

A visibly angry Brown denounced the boycott as undemocratic.

“If they don’t like a bill, then they need to show up and change it or show up and vote no. They should make their voices heard rather than shut down state government,” she said at a news conference.

Several Republican lawmakers were present earlier Monday as a legislative panel rejected a proposed GOP amendment to put the climate issue on the ballot in November. Instead, the Joint Ways and Means Committee approved the bill, sending it to the Senate floor fora vote.

The latest so-called cap-and-trade bill calls for the state to reduce greenhouse gas emissions to at least 45% below 1990 emissions levels by 2035 and to at least 80% below by 2050. The bill would force big greenhouse gas emitters to obtain credits for each metric ton of carbon dioxide they emit. Opponents say fossil fuel companies will wind up offloading increased costs to customers.

Republican lawmakers said a matter of this magnitude should be brought before voters. Republican state Sen. Fred Girod said before the committee’s vote that if the measure were referred to voters “we would stick around.”

“Just give them the right to vote,” Girod said

After the committee voted, only 19 senators — all but one of them Democrats — appeared on the Senate floor, one short of the minimum needed to proceed. Courtney said the Senate would attempt to reopen on Tuesday and implored Republicans to return..

They appeared prepared to stay away.

“If my colleagues will not allow for a fair process in the building, then I will represent my constituents from outside the building.” Sen. Lynn Findley said in a statement.

At a recent public hearing on the bill, loggers expressed concern it would lead to increased fuel costs. Others said global warming is an emergency that was already affecting them and would affect their children and grandchildren even worse.

NASA says that in the absence of major action to reduce emissions, global temperature is on track to rise by an average of 10.8 degrees Fahrenheit (6 Celsius), citing the latest estimates. 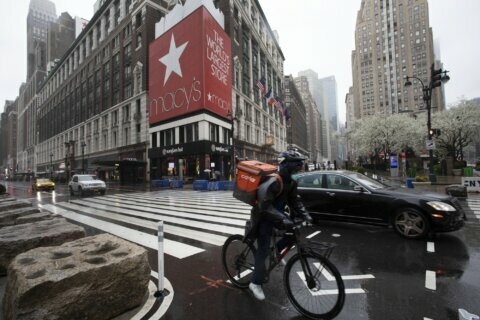