AUSTIN, Texas (AP) — A woman accused of kidnapping a Texas mother who was later found dead was indicted Tuesday…

AUSTIN, Texas (AP) — A woman accused of kidnapping a Texas mother who was later found dead was indicted Tuesday on a capital murder charge.

The indictment accused Magen Fieramusca, 34, of strangling Heidi Broussard with a leash and her hands on or about Dec. 12, the day Broussard and daughter Margot Carey were reported missing from their apartment in southern Austin.

An arrest affidavit had previously alleged that Fieramusca hatched an elaborate scheme to present the victim’s baby girl as her own. A week after the abduction, investigators found the infant alive and Broussard, who was 33, dead at a home in the Houston suburb of Jersey Village where Fieramusca had been living. Broussard’s body was found in a duffel bag found in the trunk of Fieramusca’s car,

Margot has been returned to her father.

Fieramusca had previously been charged with kidnapping and evidence tampering. She is now confined to the Travis County Jail in Austin with bonds totaling $1.7 million. She denied being in Austin at the time of Broussard’s disappearance, her nine-page arrest affidavit stated.

Fieramusca maintained that she was innocent of the charges, said her attorney, Brian Erskine, in a statement Tuesday. He repeated his previous contention that prosecutors continue to withhold information to which the defense is entitled.

According to court records, Fieramusca and Broussard were friends and met about a decade ago at church camp. At one point, Fieramusca had a key to Broussard’s apartment and the women discussed being pregnant together, even considering that they might give birth on the same day, the court record states.

Broussard’s fiance, Shane Carey, told police that both women were expecting in late 2019, according to the Dec. 19 affidavit. Fieramusca was “visibly pregnant” and would hold her hands under her belly to support the weight, he said. Fieramusca’s ex-boyfriend, Christopher Green, told police he believed she was carrying his child.

Carey said Broussard told him on Dec. 8 or 9 that Fieramusca had given birth to a baby girl, but he never saw any photos of the child, the affidavit states.

The record does not make clear whether Fieramusca was ever pregnant, but investigators found discrepancies in her account of giving birth. In one conversation, she told a Texas Ranger that she went to the beach with a cousin on Dec. 12. But she later told the same officer that she gave birth on that day, although she was unable to provide specifics of her delivery, according to the affidavit.

Green and Fieramusca continued to share a home even after they broke up. On Dec. 13, Fieramusca told Green that she had given birth without his knowledge and that the baby was in their home, the affidavit states.

An investigator later showed Green a missing persons flyer showing Broussard and her daughter. “That’s the baby at my house,” he allegedly responded. 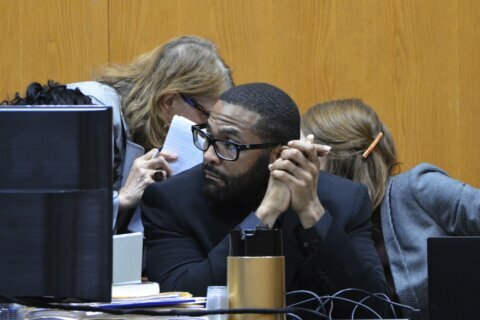