Both Justice, a Republican in a state where the GOP dominates the legislature, and Falwell, whose university is in Lynchburg, Virginia, said the invitation to join West Virginia sends a valid message.

“If you’re not truly happy where you are, we stand with open arms to take you from Virginia or anywhere where you may be,” said Justice, who’s running for reelection. “We stand strongly behind the Second Amendment and we stand strongly for the unborn.”

Democrats took full control of the Virginia statehouse in November for the first time in a generation and pledged to enact gun-control measures, roll back abortion restrictions and prohibit discrimination against LGBTQ people. Their agenda sparked a conservative backlash. This month tens of thousands of guns-rights activists flooded the Capitol and surrounding area in protest, some donning tactical gear and military rifles.

“What’s happening in Virginia right now is a tragedy in the making,” Falwell said. “Democratic leaders in Richmond, through their elitism and radicalism, have left a nearly unrecognizable state in their wake.”

Lawmakers in West Virginia have introduced formal resolutions inviting parts of Virginia to join their state.

One resolution targets Virginia’s Frederick County, but was met with a shrug from the county’s leader. The other casts a wider net to all Virginia’s counties, saying the “government at Richmond now seeks to place intolerable restraints upon the rights guaranteed under the Second Amendment of the United States Constitution.”

“We saw their way of life under attack and we wanted to offer assistance,” said Del. Gary Howell, a West Virginia Republican who sponsored one of the resolutions.

The announcement from Falwell and Justice drew laughs from both sides of the aisle in Virginia.

“What are they doing, a comedy routine?” said Republican Sen. Emmett Hanger.

“Preposterous,” said Senate Majority Leader Dick Saslaw, a Democrat. Saslaw added that Justice should be focused on solving West Virginia’s high poverty rate and “not screw around in Virginia.”

A spokeswoman for Virginia’s Democratic Gov. Ralph Northam dismissed the idea, saying “As always, Jerry Falwell’s words speak for themselves.”

The process by which such a breakup could occur is murky, but Falwell said lawyers have told him counties in Virginia would first need to conduct petition drives. Then a referendum would be held, and if successful, the proposal would go before Virginia’s General Assembly.

Rick Boyer, a Virginia conservative activist attorney and former local elected official, is helping with the so-called “Vexit” push. He said a growing movement of conservative Virginians is serious about leaving a state that he said doesn’t respect their rights.

“This isn’t street theater, we fully intend to do everything we can to see it through,” Boyer said.

University of Virginia law professor Richard Schragger, whose work includes a focus on the intersection of constitutional law and local government law, said the move would require the consent of both states and Congress.

Liberty is the nation’s highest-profile evangelical college. It has expanded from a tiny Baptist school into a touchstone institution for evangelicals. Both Falwell and Justice are ardent supporters of President Donald Trump. 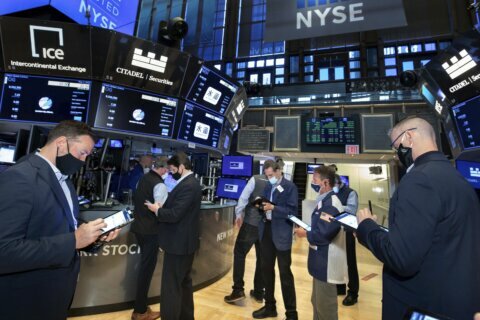 Consumer prices shot up 0.8% in April as worries escalate