Activists say the numbers should not be mistaken for a lack of energy or motivation to vote Trump out of office come November.
Listen now to WTOP News WTOP.com | Alexa | Google Home | WTOP App | 103.5 FM
(1/9) 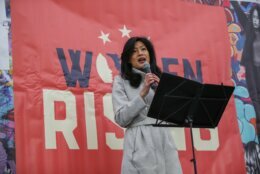 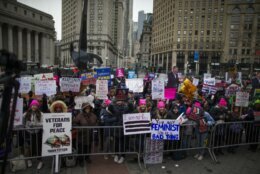 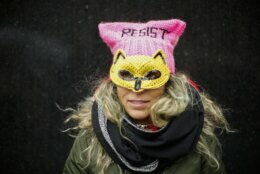 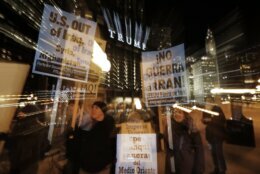 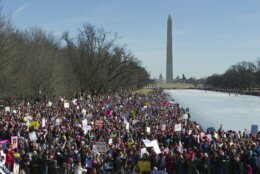 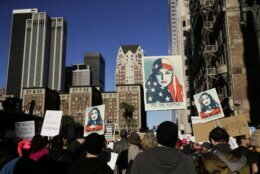 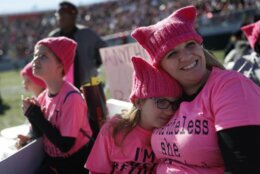 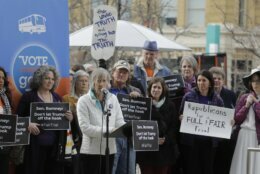 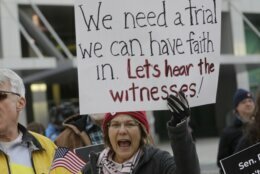 CHICAGO (AP) — Days after President Donald Trump killed an Iranian general and said he was sending more soldiers to the Middle East, about 100 protesters stood on a pedestrian bridge over Chicago’s Lake Shore Drive with an illuminated sign that read “No War in Iran.”

Some 200 people marched in the bitter cold near Boston, while a few dozen people demonstrated on the steps of Los Angeles City Hall and at similarly sized gatherings across the U.S.

Three years after Trump took office and millions of people swarmed to the Women’s March in Washington and companion marches across the country, these typically modest protests are often the most visible sign of today’s Trump resistance.

Activists say the numbers should not be mistaken for a lack of energy or motivation to vote Trump out of office come November.

The anti-Trump movement of 2020, they say, is more organized and more focused on action. Many people have moved from protesting to knocking on doors for candidates, mailing postcards to voters, advocating for specific causes or running for office.

But the movement that sprung up to oppose Trump’s presidency also is more splintered than it was when pink-hatted protesters flooded Washington the day after his inauguration for what is generally regarded as the largest protest in the city since the Vietnam era. There have been schisms over which presidential candidates to back in 2020, as well as disagreements about race and religion and about whether the march reflected the diversity of the movement. Those divisions linger even as many on the left say they need a united front heading into November’s election.

The disputes led to dueling events in New York City last year, the resignation of some national Women’s March leaders and the disbanding of a group in Washington state.

Organizers expected about 100,000 people across the country to participate in this year’s Women’s March, taking place on Saturday in over 180 cities. Several thousand gathered in Washington, far fewer than the turnout last year, when about 100,000 people held a rally east of the White House.

Instead of a single big event, there were various actions this past week that focused on climate change, immigration and reproductive rights. Those issues appeared most important to Saturday’s protesters in the nation’s capital.

“I teach a lot of immigrant students, and in political times like this I want to make sure I’m using my voice to speak up for them,” said Rochelle McGurn, 30, an elementary school instructor from Burlington, Vermont. “They need to feel like they belong, because they do.”

The week reflects that the movement is “moving into the next stage,” said director Caitlin Breedlove.

Leaders of MoveOn.org, which organized some of the anti-Iran war protests, agreed. Mobilization manager Kate Alexander said the group and its members pulled together over 370 protests in 46 states in less than 48 hours to show resistance to Trump’s actions. The president ordered airstrikes that killed Gen. Qassem Soleimani, the head of Iran’s Quds Force who has been blamed for deadly attacks on U.S. troops and allies going back decades. Iran pledged retribution, sparking fears of an all-out war.

Alexander noted that the Iran protest is just one of many issues MoveOn members have organized in response to in the past few years.

“It’s not that there are fewer people mobilizing — it’s that they’re mobilized in different campaigns. There’s more to do,” Alexander said. “I don’t believe people are tuning out. I think people are lying in wait.”

While waiting, many have passed on some major moments in Trump’s presidency. Resistance groups rallied on the eve of the House vote for impeachment, but even some of those who participated said they were disappointed more people didn’t turn out.

Several organizations also said much of their organizing is done through social media or text message and email programs, which are less visible but have a significant impact. In 2018, the Women’s March had over 24 billion social media impressions, Breedlove said.

Atef Said, a sociology professor at the University of Illinois at Chicago, said all social movements evolve over time. He noted the Trump resistance movement is global and will continue regardless of whether Trump is reelected.

“Movements always rise and decline in terms of numbers on the ground,” he said.

Andy Koch, a 30-year-old nurse who lives in Chicago, has seen that ebb and flow firsthand. Koch has been active in protesting Trump’s policies even before he took office. When Koch was a student at University of Illinois at Chicago, Trump’s campaign canceled a 2016 speech at the campus following tense student protests.

Koch said the anti-Trump activism swelled when he first took office and again in early 2017 when he announced his first travel ban affecting people from several predominantly Muslim countries.

Roughly 1,000 people mobilized in Chicago immediately after Trump authorized the attack on the Iranian leader, and then the crowds subsided a few days later after the threat of war seemed to subside following Trump’s address to the nation Jan 8. That day, a few dozen — including Koch — showed up in 20-degree Fahrenheit (minus 7 Celsius) temperatures outside Trump International Hotel Chicago during rush hour.

Koch understands that masses of people won’t show up for every protest. “ What allows those numbers to come out … is continued organizing going on in between these events,” he said.

He said there have been numerous smaller protests he’s been involved with, including protesting U.S. foreign policy in Venezuela and Syria, and they’ve taken other forms. For instance, he’s helped plan a teach-in on Iranian foreign policy this week at UIC.

Maya Wells, a 21-year-old political science senior at the University of North Carolina at Charlotte, was a speaker at a rally last week in Charlotte. Wells, who is Persian American and has family in Iran, said she doesn’t look at the numbers of people who turn out but rather at the fact that they took time out of their day to be there.

“I see more people coming. Because some of my friends who are conservatives and voted for Trump, they’re against this,” she said, adding that the most recent protest wasn’t the last.

“There will be more days to come,” Wells said. “I have no doubt in my mind.”

This story has been corrected to show Women’s March organizers expect about 10,000 people, not 100,000 people, to attend Saturday’s protest in the nation’s capital.