Not guilty plea from man accused in church wedding shooting

NASHUA, N.H. (AP) — A man accused of storming into a New Hampshire church over the weekend and shooting a clergyman and a bride during a wedding pleaded not guilty Tuesday.

Dale Holloway, 37, of Manchester, is accused of attempted murder, assault and other charges in connection with the Saturday shooting at the New England Pentecostal Ministries in Pelham. He had been released from a Massachusetts prison in December, according to The Boston Globe , after serving time for beating an estranged girlfriend in 2012.

Holloway was held without bail Tuesday. A message was left for a public defender assigned to his case.

Assistant Attorney General Benjamin Agati said authorities believe Holloway acted alone and that they were investigating whether it was connected to an earlier shooting.

Holloway is the stepson of 60-year-old Luis Garcia, who was shot to death Oct. 1 in Londonderry. The groom in the church shooting was the father of the man charged with killing Garcia. Brandon Castiglione, 24, has been charged in his murder and is jailed.

“I don’t think I’m comfortable saying it’s just a revenge shooting at this point. We are still investigating the other aspects of this,” Agati said. “There is some connection that is there. Again, we are investigating what the exact motives are for all the players involved.”

Holloway shot two people Saturday morning before wedding guests tackled him and held him down until police arrived at the church in Pelham, a town of about 13,000 near the border of Massachusetts.

The attorney general’s office said 75-year-old presiding bishop Stanley Choate, who was shot in the chest, has been upgraded to stable condition. Sixty-year-old bride Claire McMullen, who was shot in the arm, was released. Groom Mark Castiglione suffered minor injuries after being hit in the head by an object.

Agati said Holloway has a criminal record in Massachusetts. According to the court complaint, Holloway was convicted in 2003 in Massachusetts of assault and battery with a dangerous weapon and assault with intent to kill. The complaint did not mention the 2012 conviction.

In the court papers for the 2012 case, The Boston Globe reports that Holloway’s attorney detailed that his client has endured chronic abuse at the hands of his biological father.

The church remains closed to the public. Holloway’s bail hearing is scheduled for Oct. 22.

“Everyone is still in shock because we never imagined it would happen in church, let alone in New Hampshire,” said Magalie Felix, a member of the Pelham church. 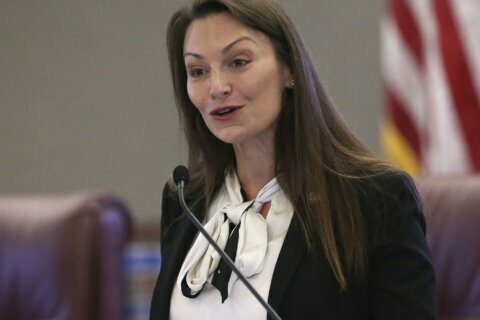 Absence of pandemic on Florida Cabinet agenda is hot topic