Police: Man who died in handcuffs said he couldn’t breathe

Officers Benjamin Vasquez, 27, and Patrick Campbell, 28, also were out of breath, and Byron Lee Williams was still talking when he was lifted by his arms to his feet early Thursday, Clark County Assistant Sheriff Charles Hank told reporters as he aired officer body-worn camera clips on Monday.

Williams did not have a weapon but appeared to try to kick away small plastic bags of a white substance and an orange bottle with white pills that dropped to the ground when he stood. Hank said investigators determined the substances were methamphetamine and hydrocodone.

Then Williams became unconscious. He was pronounced dead at a hospital less than an hour later.

The Clark County coroner said Tuesday it will take several weeks for toxicology results and a finding of Williams’ cause of death.

Thompkins said a lapse in the video is made evident by a change in the angle of the rising sun.

“You could see him on the ground, begging for help, and it was still dark,” Thompkins said. “When the images come back on and he’s on his back, the sun is up and he’s being worked on by paramedics. He’s motionless, lifeless.”

Hank said the department is investigating whether officers improperly turned off body cameras during or after the arrest and medical treatment.

Police said Williams had a history of criminal arrests and felony drug convictions in California and Nevada. Hank said he was wearing an ankle bracelet and was supposed to be on house arrest in a pending felony drug and forgery case in Las Vegas.

Camera images show Williams quickly riding the bicycle away from Campbell and Vasquez in a patrol car when they attempted to stop him.

Hank said the officers were trying to stop Williams because the bicycle had no safety lights. 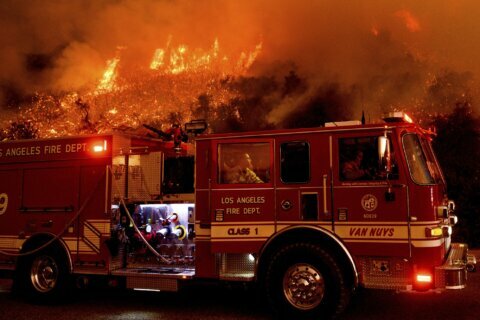