LOS ANGELES (AP) — “Game of Thrones” has dominated the Emmy Awards with the formidable power of, say, your average fearsome, flame-belching dragon. Same goes for “Veep,” but picture a cutthroat politician instead.

The drama and comedy series are among the front-runners for Sunday’s ceremony (8 p.m. EDT, Fox) for their concluding seasons, a last chance to rule. But will they? There’s suspense as well over the never-crowned women of “Game of Thrones,” whether Sandra Oh and Billy Porter will make Emmy history, and how much streaming services such as Netflix can chip away at old-guard cable and older-guard broadcasting.

“It’s the big farewell to the Emmy giants ‘Game of Thrones’ and ‘Veep,'” said Tom O’Neil, author of “The Emmys” and editor of the Gold Derby awards website. “The question is, how big will their sweeps be?”

“Game of Thrones” has the most Emmys of any drama or comedy series in history, 57, and it’s been undefeated each time it was nominated in recent years. It holds the record for most Emmys won by a series in a single season, 12, set in 2015 and matched the following year.

If the fantasy saga that brought cinematic sweep to TV successfully defends its best drama series title to net a fourth trophy, it will join a select club that can boast the same: “Hill Street Blues,” ”L.A. Law,” ”The West Wing” and “Mad Men.”

TV academy members brushed aside the anti-finale fan chorus in bestowing a single-year record 32 nominations on “Game of Thrones,” but it remains to be seen if they’re as generous Sunday. There’s worthy competition, including BBC America’s “Killing Eve”; AMC’s “Better Call Saul”; FX’s “Pose,” Netflix’s “Bodyguard” and “Ozark”; HBO’s “Succession,” and NBC’s “This Is Us.”

The actresses of “Game of Thrones” have a last shot at recognition for the series. They’ve failed to earn a single award despite receiving a combined 18 nominations over the drama’s eight-season run that, starting in 2011, brought George R.R. Martin’s novels alive with ample gore as well as strong female characters.

Emilia Clarke is aiming for a best actress win after previously vying for supporting actress honors. She’s facing Oh, the former “Grey’s Anatomy” star who would be the first actress of Asian descent to claim the top acting award, and Viola Davis of ABC’s “How to Get Away With Murder,” who in 2015 became the first African American winner in the category.

The men of “Game of Thrones” also have something to prove, with the exception of three-time winner Peter Dinklage, up for this fourth. Alfie Allen and Nikolaj Coster-Waldau, his castmates, also are in the running.

Kit Harington is getting his first shot at lead actor honors for the saga. Other nominees include “Pose” star Porter, who would be the first openly gay man to triumph in the category, and Sterling K. Brown of “This Is Us,” who in 2017 became the fourth African American actor to win the honor.

On the comedy side, “Veep” ruled as best series the past three times it was nominated, but was sidelined last year when star Julia Louis-Dreyfus’ breast cancer treatment delayed production. Amazon Prime Video’s “The Marvelous Mrs. Maisel” won and will defend the title against “Veep”; “Fleabag,” also on Amazon; HBO’s “Barry”; Netflix’s “Russian Doll”; NBC’s “The Good Place,” and Pop TV’s “Schitt’s Creek.”

Louis-Dreyfus could become a seven-time winner for the political satire and, with the two Emmys she holds for “Seinfeld” and “The New Adventures of Old Christine,” break her tie with Cloris Leachman as the most-honored performer in Emmy history. Rachel Brosnahan of “Mrs. Maisel” won last year and is nominated again.

There will be stars aplenty but no ringmaster for the three-hour show. It could go as smoothly as February’s no-host Oscars but, fingers crossed, there might be an outbreak of the spontaneity that a live telecast should have if presenters and winners cooperate. (Please don’t thank your agent, dog walker, et al.)

Nominees would do well to recall the splash that Glenn Weiss made last year, proposing to his fiancee from the stage as he accepted a directing Emmy, and prepare accordingly.

The lack of an emcee makes extended political comedy riffs less likely, but there’s always room for a skit poking fun at Washington or a soapbox acceptance speech, as Bradley Whitford offered at last weekend’s creative arts ceremony when he won a guest acting trophy for “The Handmaid’s Tale.”

If a winner uses part of the allotted 45 seconds to criticize President Donald Trump it won’t be the first time, and the former host of “The Apprentice” in turn has no love for the Emmys, said Gold Derby’s O’Neil. The reality series earned scant nominations and no trophies during its run, and Trump has bashed the awards show as “terrible,” a ratings loser and, for good measure, “sooooo boring!”

The ceremony has dropped in viewership, the case for most awards shows fighting for attention amid other distractions. Last year’s Emmys had a record-low audience of slightly more than 10.2 million, down 11 percent from the past two years. 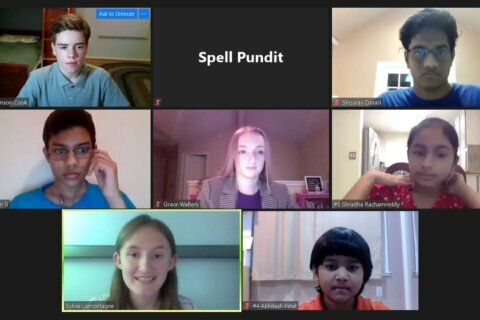