NEW YORK (AP) — A secret society billed as a “sisterhood” that would empower women instead was a scam used to put them under the control of the sex-crazed leader of a purported self-help group, a federal prosecutor said Monday in closing arguments at a New York City trial.

Assistant U.S. Attorney Moira Penza said graphic testimony showed how Keith Raniere used women known as “masters” to demand nude photos and other “collateral” from “slaves,” with the understanding the material would be made public if they didn’t obey orders to have sex with him.

The group, sometimes known as “The Vow,” was formed “to satisfy the defendant’s desire for sex, power and control,” Penza told the Brooklyn jury.

The prosecutor called the former leader of the self-help organization based in upstate New York a “con man” and a “crime boss.”

An attorney for Raniere, Marc Agnifilo, argued that his client had no criminal intent and that his sexual encounters with followers were consensual. The so-called collateral wasn’t meaningful because it was never released, he said.

“Where’s the extortion? The extortion is purely theoretical,” he said. “It isn’t in anybody’s heart.”

Raniere, 58, is a former leader of the upstate New York group known as NXIVM that once had thousands of members worldwide. He was arrested last year on conspiracy and other charges accusing him of coercing victims into unwanted sex and other servitude.

His co-defendants included TV actress Allison Mack, best known for playing a young Superman’s friend on the “Smallville” series, and liquor fortune heiress Clare Bronfman. The women, described by prosecutors as members of Raniere’s inner circle, have pleaded guilty and are awaiting sentencing.

In her closing argument, Peza recounted testimony by other former insiders and alleged victims about how some women were branded with Raniere’s initials to prove their devotion; how one follower was banished to a bedroom without leaving for 705 days; and how he groomed that same follower’s younger sister for sex starting at age 15.

Raniere used his organization to “tap into a never-ending flow of women and money,” the prosecutor said. “He was a ruler with no limits and no checks on his power.”

Agnifilo accused prosecutors of mischaracterizing the several “caring and casual” relationships Raniere had with several women who were never forced to be with him in an abusive or systematic way. When one of the alleged victims parted ways with him, “There’s no hard feelings, there’s no threats,” he said.

Watching a portion of the arguments on Monday were TV actress Catherine Oxenberg of “Dynasty” fame and her daughter India, who defected from NXIVM after her mother became an outspoken critic of the group.

The defense closing was to resume on Tuesday. 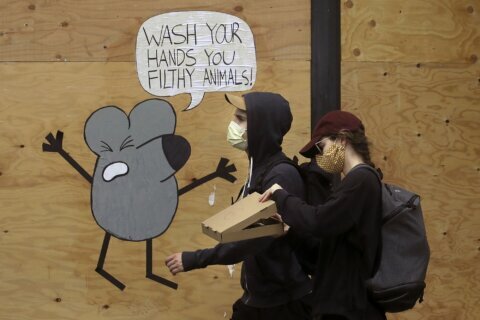