AP Investigation: Many US jails fail to stop inmate suicides

Over 25 hours, one inmate begged for a doctor, screamed “help me,” tore a blanket into strips and then killed…
Listen now to WTOP News WTOP.com | Alexa | Google Home | WTOP App | 103.5 FM

Over 25 hours, one inmate begged for a doctor, screamed “help me,” tore a blanket into strips and then killed herself. A guard, nevertheless, reported in a log that all was fine.

Another inmate, locked up on a probation violation and suffering from mental illness, threatened to choke herself. A guard told her to go ahead.

With suicides a problem in local jails across the U.S., a joint investigation by The Associated Press and the University of Maryland’s Capital News Service finds many jails have been sued or investigated in recent years for allegedly refusing inmates medication to help manage mental illness, failing to properly monitor them or ignoring cries for help.

In Lake County, California, Elizabeth Gaunt, a 56-year-old former social worker, was jailed after acting erratically but never charged. Gaunt, who had mental health and substance abuse problems, was placed in a cell with a surveillance camera and was supposed to be checked every 15 minutes. She asked for a doctor and screamed for help, before using a blanket to hang herself. A guard who looked in through a cell window had a limited view of Gaunt, didn’t investigate what was going on and noted in an observation log all was OK.

Dane Shikman, Gaunt’s son, says his mother should have been taken to a mental health center, not jail.

“It is a failure of humanity and of our institutions that causes these tragedies,” Shikman says. “When they see someone who looks like they’re struggling, they don’t say, ‘Let me step in. This is someone’s mom.’… They think this is a woman on drugs doing whatever she’s going to do, she’ll shut up.”

The county settled a wrongful death lawsuit for $2 million.

Reporters spent months examining hundreds of cases in local news reports, reviewing investigations of specific jails, and compiling a database of more than 400 lawsuits over alleged mistreatment of inmates, most of whom were mentally ill. Some 40 percent of those lawsuits involved suicides in local jails — 135 deaths and 30 attempts.

In about a third of those 165 cases, staff allegedly failed to provide prescription medicines. Many inmates also weren’t checked regularly — usually every 15-30 minutes — because of staffing shortages or inadequate training. More than half the suicides or attempts occurred during the first week of being jailed, and about 80 percent of the inmates were awaiting trial. Some inmates were even given razors, despite warnings to staff that they might harm themselves.

These lawsuits represent a tiny fraction of the problem.

Suicide, long the leading cause of death in U.S. jails, hit a high of 50 deaths for every 100,000 inmates in 2014, the latest government data available. It’s a problem commonly blamed on the fact more mentally ill people are being jailed, a trend that started after state psychiatric hospitals began closing in the 1970s. But Lori Rifkin, a California prisoners’ rights attorney, argues the vast majority of these suicides “are foreseeable and preventable.”

In Delaware County, Pennsylvania, 35-year-old Janene Wallace, who suffered from mental illness and paranoia, was in jail for a probation violation and held in solitary 51 of 52 days. She was locked up 23 hours a day at the George W. Hill Correctional Facility. When she threatened to choke herself in 2015, a guard told her to go ahead. She did. The guard went to lunch without checking on her and was among three workers fired.

“She needed treatment,” says David Inscho, an attorney for the family, which won a $7 million settlement. “They gave her the opposite.”

Other cases detail how similar callousness or poor judgment can turn deadly: In Knox County, Tennessee, an inmate who tried to kill himself with a razor six months earlier was given another one when readmitted on theft charges. A guard allegedly said he should “have done the job right” the first time. The inmate slit his throat.

In Utah, 25-year-old Tanna Jo Fillmore had long struggled with mental illness. Medication had stabilized her, but a lawsuit claims a nurse at the Duchesne County Jail refused to provide her pills. Fillmore had been jailed on a probation violation for apparently not providing a change of address. On Thanksgiving 2016, she hanged herself in her cell.

Fillmore had been diagnosed years earlier with post-traumatic stress, anxiety, panic disorder and depression. She also had a history of drug use, but attorney Tyler Ayres says she wasn’t suicidal and just needed her medication. “They have an obligation to provide adequate medical care,” he says.

Sheriff Travis Tucker, who took office in January, declined comment on the case but noted a jail wing is being built to serve mentally ill and addicted inmates.

On Easter she visited the cemetery, polishing her daughter’s headstone, putting down flowers and propping up family photos. When the tears stopped, she stood at the grave and in a strong, clear voice spoke to her lost daughter:

“Dear Jo-Jo,” she said, “we love you and we miss you and we think about you every single day. Keep dancing in the sky.”

To read more about Fillmore’s case and others across the U.S., click here: https://tinyurl.com/y3rbf926 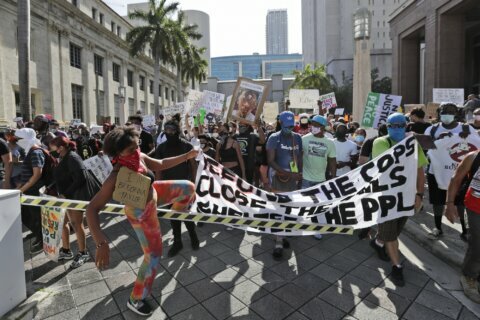