HELENA, Mont. (AP) — Helena mayor and Democratic U.S. Senate candidate Wilmot Collins has been ticketed for leaving the scene of an accident after a driver reported a hit-and-run near downtown Helena earlier this week, police said Friday.

Collins acknowledged that he “bumped” another vehicle Monday evening, but he disputes that he left the scene and plans to challenge the charge in court, he said in a statement.

Collins, 55, announced his candidacy earlier this month for the Democratic nomination to challenge U.S. Sen. Steve Daines next year. Collins came to Montana in the 1990s as a refugee escaping civil war in the African nation of Liberia and became the first black mayor of a Montana city or town when he defeated incumbent Jim Smith in 2017.

On Monday, a 35-year-old woman from Butte told police that the mayor rear-ended her vehicle when she stopped before turning onto a street near downtown Helena, interim Helena Police Chief Steve Hagen said.

The woman, who was not identified, pulled over. But Collins kept going, and she followed him until they both stopped a few blocks away. They talked, Collins gave her his business card and then he left, Hagen said in a statement.

There were no injuries, and both vehicles had minor damage, the police chief said. The city attorney forwarded the case to the Lewis and Clark County Attorney’s Office to avoid a conflict of interest, Hagen said.

Collins was cited on Thursday for careless driving and failure to remain at the scene of an accident. He has a court hearing on the misdemeanor charges scheduled for Tuesday.

Hagen said he would not release any additional information about the accident or the charges.

Collins referred questions to his campaign manager, Trent Bolger, who sent The Associated Press a written statement attributed to Collins. It said he “accidentally nudged” the back of a stopped car, but it was so light that he didn’t realize he had made contact.

He said he drove on, and the other driver caught up to him and honked at him to pull over.

“The driver said she recognized me and knew who I was,” he said. “I gave her my card and told her I would pay for any damage to the vehicle at any repair shop of her choice. We shook hands, and she seemed satisfied with my offer.”

Collins said the other driver left the parking lot before he did, and he followed up with her the next day to see if she had assessed the damage.

The mayor said he plans to plead guilty to the careless driving charge, but not to the charge of leaving the scene of the accident.

Collins has previously been cited in Helena twice for speeding and twice for failing to carry proof of insurance in his vehicle, according to the Independent Record . 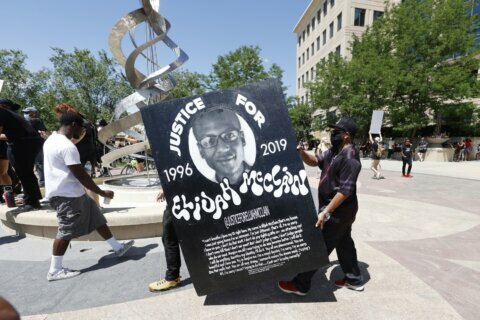