TOPEKA, Kan. (AP) — Democratic Gov. Laura Kelly’s effort to expand Medicaid in Kansas this year died Saturday when enough moderate Republicans bowed to the wishes of the GOP-controlled Legislature’s conservative leaders and ended an impasse that had tied up the state budget.

The House voted 79-45 in favor of an $18.4 billion spending blueprint for state government for the budget year beginning in July. Democrats and moderate Republicans held the budget hostage Friday and much of Saturday, hoping to force the Senate to vote on an expansion plan passed by the House and favored by Kelly. Republican leaders did not budge on putting off action until next year and kept meeting with GOP moderates throughout the day to bring them back to the fold.

It helped them that the budget was a good one for Kelly, fellow Democrats and the GOP moderate, providing extra money for higher education and pay raises for state employees, though her administration had problems with how it allocated extra dollars for prisons. The Senate later approved the budget bill on a 26-14 vote, sending it to Kelly.

Expansion supporters initially were willing to risk the spending gains to fulfill Kelly’s goal of expanding Medicaid health coverage to an additional 150,000 Kansas residents now. Some became more nervous as the day wore on, though, particularly with the Senate’s top Republicans determined to wait until next year.

Top GOP senators strongly opposed the House’s expansion bill. Rep. Don Hineman, a moderate Republican from western Kansas in the center of ongoing talks with GOP leaders, said he was reassured by public promises from Senate leaders that a bill would be drafted later this year and considered early next year, though Kelly’s office urged them to keep blocking the budget.

“Their message was, ‘Hold tough. We think we can get this,'” Hineman said. “Enough of us disagreed with that or became uncomfortable enough that the votes were there to adopt the budget.”

“For many of our neighbors struggling with illness or disability, time is something they do not have,” Kelly said in a statement after the House’s budget vote. “Due to the failure tonight, thousands of Kansans will go without health care for another year.”

Republicans leaders argue that the expansion plan Kelly backed would be more expensive for the state than her administration projected — $34 million in net costs for the state in its first full year. They also contend that lawmakers need more time to get the details right, control health care costs, and consider work requirements for people covered by the expansion.

GOP leaders also said their focus during the impasse was in getting a budget passed, so that state government could operate past June and lawmakers could wrap up their business for the year. The spending blueprint contained more spending — a 6.5% increase over the current budget year — than many conservatives wanted, GOP leaders said.

Republicans then finished work on their top priority, a tax bill designed providing relief to individuals and businesses paying more in state income taxes because of changes in federal tax laws at the end of 2017. It passed the House on an 83-41 vote after the Senate approved it Thursday, sending the measure to Kelly.

Democrats did not hide their bitter disappointment over Medicaid expansion.

“We all stayed and a bunch of you strayed,” said Rep. Tim Hodge, a Wichita-area Democrat. “I can’t believe we can’t stay solid for a few hours.”

During the budget vote, Democrats briefly played rocker Tom Petty’s song, “I Won’t Back Down” as GOP leaders held the roll open for more than 90 minutes to get the last necessary yes votes — and then nearly all Republicans jumped aboard.

“They had everything going for themselves,” said Senate Minority Leader Anthony Hensley, a Topeka Democrat. “They had all the momentum and they just can’t put up with the pressure.” 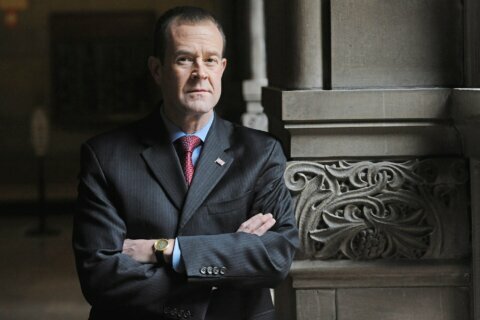