The measure passed by a 257-150 vote over the opposition of most Republicans, who said it should also include the Trump administration's $4.5 billion request for stepped up humanitarian aid and law enforcement along the U.S.-Mexico border.

WASHINGTON (AP) — The House on Friday passed a $19 billion disaster aid bill that would deliver long-sought relief to farmers, victims of hurricanes and floods, and rebuild southern military bases, as Democrats try to dislodge the legislation from a Senate logjam over aid to hurricane-slammed Puerto Rico.

The measure passed by a 257-150 vote over the opposition of most Republicans, who said it should also include the Trump administration’s $4.5 billion request for stepped up humanitarian aid and law enforcement along the U.S.-Mexico border, which is facing a wave of migrants fleeing violence in Central America.

The House had passed an earlier $14 billion version of the measure in January, but the legislation has been held up in the Senate amid a fight between President Donald Trump and Democrats over aid to Puerto Rico. Trump is feuding with Democratic officials on the island and falsely claims that Puerto Rico has already received $91 billion in aid.

Trump took to Twitter on Thursday to urge Republicans to vote against the bill.

“House Republicans should not vote for the BAD DEMOCRAT Disaster Supplemental Bill which hurts our States, Farmers & Border Security,” Trump tweeted. “We want to do much better than this. All sides keep working and send a good BILL for immediate signing!”

After the vote, Trump tweeted in praise of GOP solidarity, although 34 Republicans broke with his position and supported the disaster aid. “Great Republican vote today on Disaster Relief Bill. We will now work out a bipartisan solution that gets relief for our great States and Farmers. Thank you to all. Get me a Bill that I can quickly sign!”

Some of the Republicans who broke with Trump were from areas hit by the disasters, like Texas and Florida, and others were more moderate Republicans from the Northeast.

Disaster aid measures are usually among the few reliably bipartisan pieces of legislation left in an increasingly partisan Washington. But the pending measure faces several obstacles in addition to the battle over Puerto Rico, including an attempt by powerful Senate Appropriations Committee Chairman Richard Shelby, R-Ala., to boost Army Corps of Engineers harbor dredging efforts, of which the Port of Mobile in his state would be a major beneficiary. Shelby’s relationship with White House Acting Chief of Staff Mick Mulvaney also appears strained.

Since the House measure originally passed, Midwestern floods have added billions of dollars to the government’s roster of disaster needs, while a rising wave of Central American migrants seeking refuge from violence in their countries is requiring additional billions of dollars to house and care for thousands of migrants.

“The bill languished for months in the Senate over assistance for Puerto Rico. And as it sat there, floods battered the Midwest and tornadoes swept the South,” said House Appropriations Committee Chairwoman Nita Lowey, D-N.Y. “This legislation attempts to meet the needs of all of America’s disaster-stricken communities — whether in Puerto Rico or the Midwest, California or the Carolinas.”

Republicans on Thursday delivered a new offer to Democrats in hopes of finally breaking the legislation free, adding money for Puerto Rico and flooded Midwestern states. Lawmakers had hoped to have the legislation enacted into law by now but are now eying Memorial Day as an informal deadline.

“I’ve spoken to the president. I’ve spoken to the leader on the Senate side. I believe we can solve this all by next week,” said top House Republican Kevin McCarthy of California. “Let’s do this together. Let’s show America that when it comes to a time of need that we all put partisanship aside.”

Democrats regard the offer in a positive light.

“The Republicans are finally starting to realize they can’t leave Puerto Rico behind, and that’s a step in the right direction,” said a spokesman for top Senate Democrat Chuck Schumer of New York. “Conversations continue.”

The White House and some Republicans want to add Trump’s border request to the measure.

“We should provide much needed relief to communities recovering from hurricanes, floods, wildfires and tornadoes. But we cannot turn our backs on a border crisis that is growing worse by the day,” said top Appropriations Committee Republican Kay Granger of Texas. “Law enforcement and humanitarian relief organizations are being pushed to the limit, and we must act now.”

Democrats have resisted the idea of merging the border and disaster measures, saying that would delay the aid measure and complicate its passage.

House Speaker Nancy Pelosi, D-Calif., however, said in a brief interview that “there may be some pieces” of Trump’s border request that could be added to the disaster aid measure in endgame negotiations. “We’ll see.”

Friday’s measure originally added $3 billion to the earlier House bill to help Midwest states such as Iowa and Nebraska recover from this spring’s floods — but then was successfully amended on the floor numerous times by lawmakers in both parties, who added $1.9 billion to the measure, chiefly to rebuild military bases in Nebraska and Florida and deliver more flood aid for the Midwest.

The measure also would extend the federal flood insurance program through September to give lawmakers more time to renew the program, which enjoys broad bipartisan support. The additional time would give the House and Senate banking panels time to develop a longer-term extension of the program. 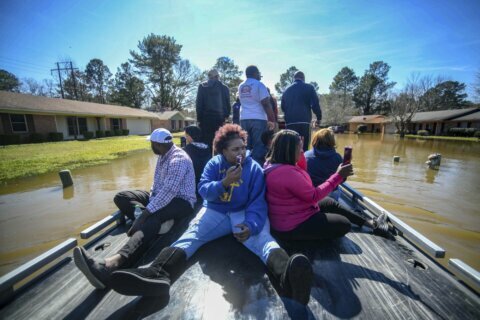 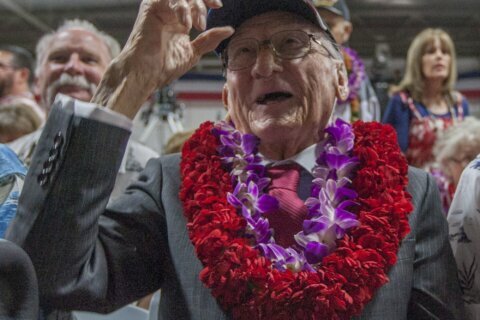