No breakthrough in shutdown talks as Trump stands by demands

President Donald Trump held out little hope Sunday that another round of talks between top aides and congressional staff would produce meaningful progress toward ending the partial government shutdown. "I don't expect to have anything happen at that meeting," said Trump about the talks led by Pence on the impasse over money for a U.S.-Mexico border wall. "But I think we're going to have some very serious talks come Monday, Tuesday, Wednesday."
Listen now to WTOP News WTOP.com | Alexa | Google Home | WTOP App | 103.5 FM
(1/3) WASHINGTON (AP) — President Donald Trump stood by his demands for funding for a border wall Sunday as another round of shutdown talks failed to break an impasse, while newly empowered House Democrats planned to step up the pressure on Trump and Republican lawmakers by passing legislation this week to reopen parts of the government.

Trump, who spent part of the day at Camp David for staff meetings, showed no signs of budging on his demand of more than $5 billion for a wall along the U.S.-Mexico border. White House officials affirmed that request in a letter to Capitol Hill after a meeting with senior congressional aides led by Vice President Mike Pence at the White House complex yielded little progress.

The letter from Office of Management and Budget Acting Director Russell Vought also formalized Trump’s declaration that the wall would be built from steel, rather than concrete, asking for funding for a “steel barrier on the Southwest border.”

The White House said the letter, as well as details provided during the meeting, sought to answer Democrats’ questions about the funding request. Democrats, though, said the administration failed in both the meeting and the letter to provide a full budget of how it would spend the billions requested on the wall, money the president wants from Congress.

The letter includes a request for $800 million for “urgent humanitarian needs,” a reflection of the growing anxiety over migrants traveling to the border — which the White House said Democrats raised in the meetings. And it repeats some existing funding requests for detention beds and security officers, which have already been panned by Congress and would likely find resistance among House Democrats.

Still, the request makes clear a wall is a top priority. Vought writes that a “physical barrier — wall — creates an enduring capability that helps field personnel stop, slow down and/or contain illegal entries.”

Trump sought to frame a steel barrier as progress as he returned from the presidential retreat in Maryland, saying Democrats “don’t like concrete, so we’ll give them steel.” The president has already suggested his definition of the wall is flexible, but Democrats have made clear they see a wall as immoral and ineffective and prefer other types of border security funded at already agreed upon levels.

With the partial shutdown in its third week, House Speaker Nancy Pelosi said she intends to begin passing individual bills to reopen agencies in the coming days, starting with the Treasury Department to ensure people receive their tax refunds. That effort is designed to squeeze Senate Republicans, some of whom are growing increasingly anxious about the extended shutdown.

The seemingly intractable budget showdown marks the first clash for Trump and Democrats, who now control the House. It pits Trump’s unpredictable negotiating stylings against a largely united Democratic front, as many Republicans watch nervously from the sidelines and hundreds of thousands of federal workers go without pay.

Although Trump tweeted that the Sunday session had been “productive,” two Democrats familiar with the meeting gave a different take, saying the White House had not provided the budget details they had requested and again declined to re-open government. One of the officials — neither was authorized to speak publicly — said no additional meetings were scheduled.

Trump said earlier in the day that he was hoping for “some very serious talks come Monday, Tuesday, Wednesday.” While insisting he wanted to make a deal, he also declared he would not give an inch in his fight for funding for a border barrier, saying: “There’s not going to be any bend right here.”

Among the Republicans expressing concerns was Sen. Susan Collins, R-Maine, who said Senate Majority Leader Mitch McConnell should take up bills from the Democratic-led House.

“Let’s get those reopened while the negotiations continue,” Collins said on NBC’s “Meet the Press.” Democrats criticized McConnell for waiting on Trump’s support, but Collins said she was sympathetic to McConnell’s opposition to moving legislation without agreement from the president.

Several Republicans pushed the Interior Department to find money to restaff national parks amid growing concerns over upkeep and public safety. And Senate Minority Leader Chuck Schumer, D-N.Y., suggested Sunday that pressure would only mount amid the shutdown, which he said is disrupting Transportation Security Administration operations, home loans and farmers in his state.

“Democrats and now a growing number of Republicans are coming together and saying let’s open up the government and debate border security separately,” Schumer told reporters in New York.

Adding to concerns, federal workers might miss this week’s paychecks. Acting chief of staff Mick Mulvaney said on NBC’s “Meet the Press” that if the shutdown continues into Tuesday, “then payroll will not go out as originally planned on Friday night.”

Trump reaffirmed that he would consider declaring a national emergency to circumvent Congress and spend money as he saw fit. Such a move would seem certain to draw legal challenges.

Incoming House Armed Services Committee Chairman Adam Smith, D-Wash., said on ABC’s “This Week” that the executive power has been used to build military facilities in Iraq and Afghanistan but would likely be “wide open” to a court challenge for a border wall. Speaking on CNN’s “State of the Union,” Intelligence Committee Chairman Adam Schiff called the idea a “nonstarter.”

“Look, if Harry Truman couldn’t nationalize the steel industry during wartime, this president doesn’t have the power to declare an emergency and build a multibillion-dollar wall on the border,” said Schiff, D-Calif.

Trump also asserted that he could relate to the plight of the hundreds of thousands of federal workers who aren’t getting paid, though he acknowledged they will have to “make adjustments” to deal with the shutdown shortfall. A day earlier, the president had tweeted that he didn’t care that “most of the workers not getting paid are Democrats.”

Mulvaney, sought to frame Trump’s support for a steel barrier as progress in the negotiations, saying on NBC that “if he has to give up a concrete wall, replace it with a steel fence in order to do that so that Democrats can say, ‘See? He’s not building a wall anymore,’ that should help us move in the right direction.”

Trump said he planned to call the heads of American steel companies in hopes of coming up with a new design for the barrier he contends must be built along the southern border. His administration has already spent millions constructing wall prototypes near the border in San Diego. 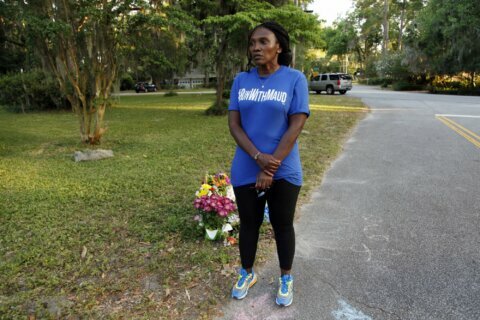 In his final days, Ahmaud Arbery’s life was at a crossroads

In his final days, Ahmaud Arbery’s life was at a crossroads