— An intimate melodrama set in England just before the outbreak of World War II, “The Dig” is the kind of well-crafted, well-acted period drama not unearthed so often. Simon Stone’s adaptation of John Preston’s novel, which begins streaming Friday on Netflix, stars Carey Mulligan as a British landowner and widow who brings in a local excavator for a provincial museum (Ralph Fiennes) to investigate what will prove to be a landmark archeological find. In her review, AP Film Writer Lindsey Bahr called “The Dig” “a truly beautiful piece, contemplative and melancholy, with a lovely score by Stefan Gregory and enveloping scenery shot by Mike Eley.”

— Aside from “Trolls” and Woody Allen’ “Wonder Wheel,” Justin Timberlake hasn’t been acting much since a string of good early ‘10s performances including “Social Network” and “Inside Llewyn Davis.” In Fisher Stevens’ “Palmer,” Timberlake takes a rare leading role in a predictable but tender redemption drama. In the film, debuting Friday on Apple TV+, a bearded Timberlake plays an ex-convict and former college football star who returns home from prison and strikes up a friendship with a boy (Ryder Allen) being looked after by his grandmother (June Squibb).

— iHeartRadio’s fifth annual ALTer EGO show dedicated to contemporary rock artists starring Billie Eilish, Foo Fighters and Coldplay will air virtually on Thursday night. Other performers include Mumford & Sons, twenty one pilots, Beck, the Black Keys, the Killers, Weezer, blink-182, Cage the Elephant and Muse. Foo Fighters will kick off the performances at 9:30 a.m. EST and Eilish – who will go on at 10:20 a.m. EST – will wrap the event.

— British singer-songwriter Arlo Parks is having a breakthrough, and she can count former first lady Michelle Obama as a fan. The singer’s “Eugene” – taken from her debut “Collapsed In Sunbeams” – was featured on “Vol. 1: The Michele Obama Playlist” on Spotify, inspired by the first season of Obama’s podcast. Parks, who will released her album on Friday, was also longlisted for the prestigious BBC Sound of 2020 poll.

— Live from the Roxy Theatre in Los Angeles, Adam Lambert will hold a concert Friday to celebrate his 39th birthday. “Adam Lambert Live” will include two shows – one at 3 p.m. EST and another at 10 p.m. EST. He will perform songs from his latest album, “Velvet,” as well as other tracks from his catalog. Tickets cost $18.50.

— “Real Sports with Bryant Gumbel” returns 10 p.m. EDT Tuesday for season No. 27 with a sidekick: “The Real Sports Podcast,” which expands on stories featured on the HBO series with further interviews and behind-the-scenes details. Among the segments featured on the debut episode of Gumbel’s show: how Minneapolis police officers helped build a high school sports powerhouse and student trust, and profiles of athletes struggling with “long-haul” COVID-19 symptoms. The accompanying podcast’s first episode is out this week.

— If a wacky sci-fi series sounds appealing, check out “Resident Alien.” Alan Tudyk plays Harry, masquerading as a small-town doctor — and a human — after crash-landing on Earth. He’s pulled into helping solve a murder and relationships with his new neighbors, complicating his assignment to wipe out the planet’s population. Tudyk (“Firefly,” “American Dad!”) fully embraces the silly, along with castmates including Sara Tomko (“Once Upon a Time”) and Corey Reynolds (“The Closer”). Based on the comic book series of the same name, “Resident Alien” debuts 10 p.m. EST Wednesday on SyFy.

— “Forgotten Genius” pays tribute to Percy Julian, an African American chemist whose achievements and success came despite the roadblocks of racism. The 2007 documentary, which is being rebroadcast Wednesday on PBS’ science series “Nova” (check local listings for time), recounts his pioneering research that helped lead to the mass production of cortisone and birth control pills. Ruben Santiago-Hudson (“Billions”) portrays Julian, who became a wealthy businessman and advocate for civil rights. The documentary streams free through February on PBS.org. 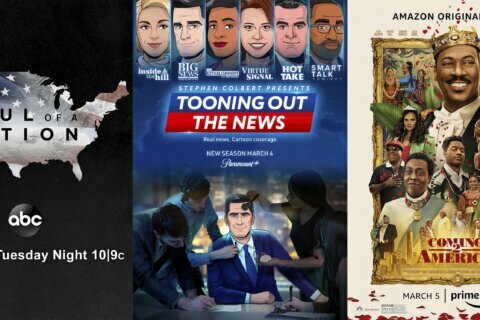