With glut of festivals, hard to match Woodstock magic

NEW YORK (AP) — Fifty years after Woodstock, the mystical and messy event that gave birth to a myriad of…
(1/4) 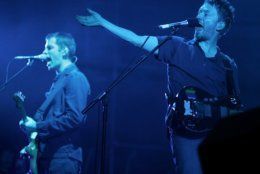 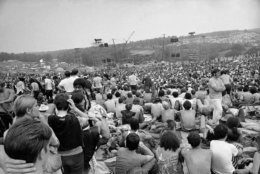 NEW YORK (AP) — Fifty years after Woodstock, the mystical and messy event that gave birth to a myriad of musical festivals, the entertainment industry is diluted with festivals and events like it — some genre specific, some extremely diverse and others offering experiences in addition to music, ranging from food to art, in order to appeal to wider audiences.

And while there have been historic moments at music festivals since Woodstock — from Prince’s 8-minute cover of Radiohead’s “Creep” at Coachella in 2008 to Radiohead’s groundbreaking Bonnaroo set in 2006 to Beyoncé’s black pride summit at last year’s Coachella — could what happened at Woodstock be replicated?

“It’s hard to compare any modern-day festival to what occurred at the original Woodstock. It was a cultural event that was a watershed happening that captured the imagination of an entire generation,” said Ray Waddell, president of media and conferences at Oak View Group, which owns concert trade publication Pollstar. “It was an amazing summer, an incredible year. It all kind of came together at Woodstock in 1969. To try to replicate that, they’ve never fully been able to.”

Since the original Woodstock, which took place August 15-18 in 1969 in Bethel, New York, and featured Jimi Hendrix, Grateful Dead and more, festivals have grown tremendously and, when done properly, are money makers. The Coachella Valley Music and Arts Festival, which takes place every April in Southern California, is the most successful festival in the United States, selling out quickly, and even before its lineup is announced. Other festivals have maintained a strong presence, too, from the Bonnaroo Music and Arts Festival in Tennessee to Lollapalooza in Chicago.

Today, about every major city has at least one festival — some gone after a year, others persisting through. But it’s made the festival scene overcrowded, and now producers are working tirelessly to make their festivals different than the next one. That has become increasingly difficult over the years, as many acts use festivals almost as a touring stop, headlining multiple festivals within a matter of weeks.

“What makes the festival stand out is one, the experience, and two, exclusivity and uniqueness of the lineup. They can ebb and flow with the lineup. You look at Bonnaroo, which fell off for a couple of years and then came back this year with the perfect mix of a lineup that captured the attention of the people who are willing to camp out three or four days,” Waddell said. “The problem is there’s not enough headlining acts out there.”

He continued: “One thing that Coachella has going for it is it’s first in April. When they had Outkast that year, LCD Soundsystem that year, Guns N’ Roses — they were the first and three or four or more booked those same acts but you didn’t know that.”

Boutique festivals that cater to smaller audiences as well as artist-curated festivals have been a success in recent years. Jay-Z launched Made in America in Philadelphia seven years go, and other artists have done the same, including Drake, Pharrell, Travis Scott, Mumford & Sons, J. Cole, Bon Iver, Grace Potter & the Nocturnals, the National and others.

“There are a lot of reasons festivals don’t work right now, oversaturation being one of them,” said Jordan Kurland, co-founder of Noise Pop Festival in the San Francisco Bay Area and co-founder of Brilliant Corners, the artist management company home to Death Cab for Cutie and She & Him.

Kurland said some festival organizers need to think beyond performances. “What is the festival doing differently? Why does it exist? It’s not enough to just fence a field and say we’re going to have 30,000 people here because we have major acts,” he said.  “Launching a good, sustainable festival is doing something unique. It doesn’t just stand on talent at this point. It’s festival experience. It’s festival location.”

Alec Jhangiani, the co-founder and producer of Fortress Festival in Fort Worth, Texas, said he believes festivals have lost their “sheen a little bit as it becomes more prevalent.”

“I think what a lot of these festivals are keying in on now is it can’t just be so music dependent. It can be anchored in music, obviously — that’s going to be a large part of it — but how do you refresh it from the content side?” he said.

“I don’t think anytime soon people are going to stop their impulse to gather at these large festivals and places where there are tens of thousands of people — that seems to just be a part of human experience — but I think they’re obviously going to demand more and more new and interesting ways of presenting the content. It’s our job to keep innovating the space.

Celebrity birthdays for the week of March 1-7