MADISON, Ill. (AP) — Kyle Larson is willing to drive just about anything with four wheels and an engine, and his ability to jump between NASCAR’s highest level and small-town late model races on dirt should come in handy this weekend.

You see, Larson showed up to World Wide Technology Raceway on Friday for the first practice before the Cup Series makes its much-anticipated debut there Sunday having never taken a lap there — not in a race, a tire test or even in a simulator.

But given everything he drives — stock cars, sprints, midgets — he sees more new tracks than just about anyone.

“My schedule is pretty busy and by the time it was Gateway week,” Larson said, referring to the track by its old nickname, “I realized I was racing every day this week. I wasn’t home. But I think I’ll be fine. I feel like I adapt pretty quickly, and I have a pretty good track record on tracks I go to the first time.”

This week alone, Larson had a late model race at Tri-City Speedway in nearby Granite City, Illinois, rained out Wednesday, then won the pole there before crashing out in a makeup race Thursday night. And after taking his practice laps around the 1 1/4-mile hairpin track east of St. Louis on Friday, he was headed back to Tri-City for another race that night.

He’s also raced at a dirt track in Pevely, Missouri, which is about 30 minutes away, and in a midget just across the river at The Dome at America’s Center; the former home of the St. Louis Rams now puts on indoor dirt-track races.

“So I’ve raced all around here but never here,” Larson said. “Haven’t had too much time to prepare. I haven’t run any laps here to test, nothing on the simulator. We’ll get the hang of it today and go out and qualify on Saturday.”

While it’s new to NASCAR’s top series, Gateway has a rich tradition. It was built as a drag strip in the 1960s and expanded into a full-purpose racing venue, hosting dozens of lower-level NASCAR events in the late ’90s and early 2000s.

Then, an economic downturn left it on the brink of financial ruin.

It took the vision and resources of real estate developer Curtis Francois, who grew up watching races across the Midwest, to rescue the track and begin building it out. Over nearly a decade, he’s poured millions into facility upgrades with more on the way, turning the speedway into a 700-acre destination for race fans.

The long front-stretch grandstand and towering seats in the tight first and second turns are sold out Sunday, along with 1,200-plus campsites and dozens of hospitality areas. That means a crowd of more than 60,000 is expected.

Nobody is quite sure what all those fans will see.

The egg-shaped oval, with sweeping third and fourth turns, reminds some drivers of Phoenix or New Hampshire. Others point to Richmond. Whatever the case, Gateway is one of the few tracks where they’re going to be active on the clutch: it probably takes two shifts to get through the first two corners and at least one through Turns 3 and 4.

“Any time you head to a new track it’s tough,” Chase Elliott said. “You can do everything to prepare but you’re not really going to know until you make those first laps in practice. We’re getting a little more track time than we do at most tracks, so that will give us an opportunity to try to figure some things out ahead of Sunday.”

About two dozen drivers have at least some experience at Gateway, whether in the 15 races run in the Xfinity Series from 1997 until the track’s closure or the 21 races run in the Truck Series before and after Francois purchased it.

For the rest, the speedway just a stone’s throw from the Mississippi River represents an entirely new challenge.

“I think of that track a lot like a yo-yo,” said Ross Chastain, who start-and-parked a truck at Gateway in 2018 before winning the next year. “Creating the momentum in 3 and 4 to make a pass in Turn 1, out-brake somebody and slide up in front of them, downshift — all of that work coupled with the heat and humidity that we’ll have there, you’re going to have to be on it to make it through a whole Cup race there.” 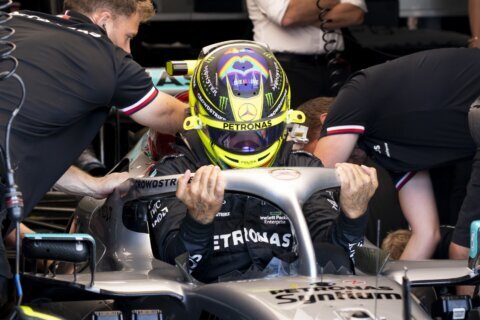