MARTINSVILLE, Va. (AP) — William Byron knew he was in for a big challenge with a two-lap overtime sprint about to start and the very aggressive Joey Logano right behind him.

He also felt like he had a pretty remarkable co-pilot in his corner.

“This one is for my mom,” Byron said. “This same weekend last year she had kind of a mini-stroke and was diagnosed with brain cancer. It means a lot to have her here and it’s been a crazy year. But she’s doing great. I kind of felt like she was riding in there with me.”

Byron took the lead on pit road after Stage 2 stops and held it pretty much the rest of the way at Martinsville Speedway — he led 212 laps — to become the first repeat winner this season in NASCAR’s Cup Series on Saturday night.

Byron needed to hold off a challenge — and a nudge — from Logano on a two-lap overtime sprint to finish it, but won for the fourth time in his career and gave Hendrick Motorsports four victories in eight races this season.

When the final caution, and only the second for an on-track issue of the night, came with five laps to go, Byron and the seven drivers behind him opted to stay out for the final dash.

“I thought everyone behind us would pit, and luckily we stayed out,” he said. “We were aggressive; we felt like we could refire on the tires and be OK, and you’ve got one of the most aggressive guys behind you in Logano.”

Byron had both a fast car that allowed him to pull away on restarts and a strong one on long runs, critical since there wasn’t a caution for anything but the end of a stage until the 311th of 400 laps on the 0.526-mile oval.

That changed when Todd Gilliland had a flat tire and hit the wall with five laps to go. Byron and the top eight cars on the track opted not to pit, with Byron picking the inside lane and Austin Dillon, running second, on the outside.

That gave Logano a prime opportunity to bump the leader out of the way, especially when Dillon spun his tires on the restart. Logano bumped Byron in Turn 2 on the last lap, but Byron held on for his second win of the weekend. He won in the Truck Series on Thursday night, earning him a pair of the raceway’s unique grandfather clock trophies for three days of solid racing.

“Willy kind of messed up off of 4 and let me get to him, and he did a really good job of brake checking into third, right, which is a good job,” Logano said. “He did what he was supposed to do, and kind of got me all stuffed up behind him and I couldn’t accelerate off the corner and be as close as I needed to be.”

Dillon appeared to have a car likely to challenge on a long green-flag run, and beat Logano for second on a restart with 80 laps to go, but after Byron pulled away, lapped traffic and consistency helped him build a nearly three-second lead.

The start of the race was delayed by more than an hour when rain and sleet fell on an already frigid night. It got underway with radar suggesting more precipitation was coming, perhaps even some snow, but none materialized.

It all conspired to provide a clean track, and a virtual single-file parade.

Pole-sitter Chase Elliott led the first 185 laps, winning the first and second stages for the fifth time in his career, but lost the lead in the caution stops that followed Stage 2 and had trouble as the night went on. He finished 10th.

Elliott’s 185 laps led to begin the race matched what Darrell Waltrip did at the start of the 1980 race at Martinsville. Waltrip, though, went on to win.

Coming off a victory at Richmond Raceway and to another short track where he leads all active drivers with five wins, any hope Denny Hamlin brought to Martinsville was taken away bit by bit. He qualified 25th, was lapped by Elliott at the end of Stage 1 and made laps in the back of the field and finished 28th.

The top series moves to its third straight short track, this time on the dirt at Bristol Motor Speedway next Sunday. 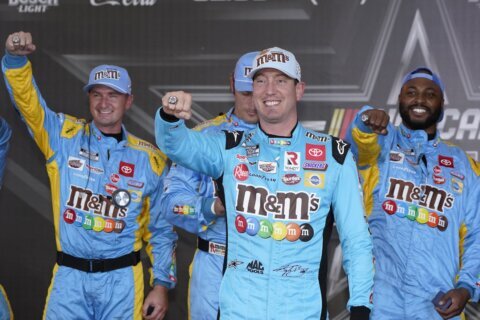 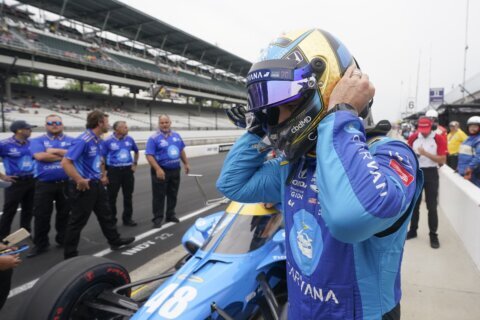 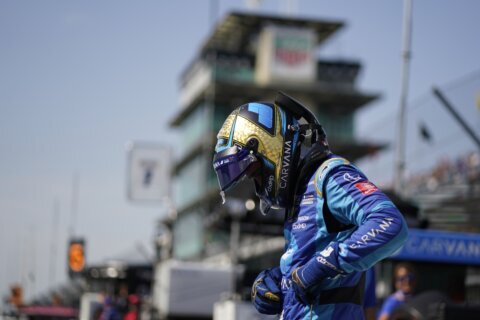