Coronavirus News: Fairfax Co. votes to increase substitute teacher pay | Is it time to get a COVID-19 booster? Which one? | Local cases of COVID-19 | How many in DC region are vaccinated?
Home » Motorsports » Larson returns to Las…

Overlooked in the post-race spat between Kevin Harvick and Chase Elliott was yet another trip to victory lane for Kyle…
Listen now to WTOP News WTOP.com | Alexa | Google Home | WTOP App | 103.5 FM

Overlooked in the post-race spat between Kevin Harvick and Chase Elliott was yet another trip to victory lane for Kyle Larson, NASCAR’s championship favorite.

As Larson celebrated his Cup Series-high sixth points win of the season, Hendrick Motorsports teammate Elliott jawed with Harvick following their on-track dustup at Bristol Motor Speedway. A flat tire had ruined Elliott’s own shot at the win so he deliberately slowed Harvick to help his teammate beat his new rival.

Their heated feud injected some excitement into NASCAR’s 10-race playoff series, which shifts Sunday to Las Vegas Motor Speedway for the opening race of the second round. But the dustup between Harvick and Elliott distracted from the results; Larson potentially jumpstarted another streak, and Hendrick Motorsports slid all four of its drivers into the next playoff round.

It’s a shift in momentum from the first round, when Joe Gibbs Racing opened with a pair of wins from Denny Hamlin and Martin Truex Jr., while Hendrick seemed vulnerable with both William Byron and Alex Bowman in danger of playoff elimination just one week ago. Instead, all four Hendrick drivers go to Las Vegas with their title chances still intact and Larson returning to the site of his first victory of the season.

The playoffs started with talk of Rick Hendrick’s four Chevrolets claiming all four spots in the championship round but it faded after the pair of JGR wins. Now it’s a reset and the Hendrick drivers are back in business.

“I think there’s a lot of strength in the individual (Hendrick) teams,” Byron said this week. “We had a difficult stretch there with the start of the playoffs … (but) we all ran well at Bristol and that was a really good sight to see. I think we’re poised to do really good things and we’ve overcome some things and there will be a lot more as we go through the playoffs.”

Larson dominated in March by leading a race-high 103 laps for his first victory driving for Hendrick. It opened what has been a breakout season in which Larson through 29 races has career bests in wins (six), top fives (16) and top 10s (21).

His 1,905 laps led is also a career best, and he needs just 95 more laps out front to become only the 20th driver in NASCAR history to lead more than 2,000 laps in a season. There are only three active drivers to hit that mark: Harvick, Truex and Kyle Busch.

Kurt Busch returned to his home track a year ago and scored a surprise victory to advance into the third round of the playoffs. He’ll be making his 750th career start in Sunday’s race but with much smaller stakes.

Busch made his Cup debut in 2000 driving for Roush Fenway Racing. He has collected 33 victories, a championship and a Daytona 500 win.

He will move to 23XI Racing next season.

“It is hard to imagine, 20-plus years in the NASCAR Cup Series,” Busch said. “To have been able to compete at this level with some of the best teams in the sport and against the level of competition is such a privilege. It is like aging, the years seem to go faster, it seems like 700 starts was just a few weeks ago.

“I feel like I have some race wins still out in front of me and I am looking forward to whatever the next milestone will be that I have a privilege to accomplish.”

Brad Keselowski was among those who predicted a Hendrick sweep into the final four round of the playoffs. He also figured the Ford camp didn’t stand a chance.

But all three Ford drivers from Team Penske have advanced into the second round, as did Kevin Harvick of Stewart-Haas Racing. And Las Vegas has been a good track for the Penske drivers: Keselowski and Joey Logano have combined to win five of the past 11 races at the track.

In March, Keselowski finished second to Larson, while Ryan Blaney was fifth and Logano ninth.

“Las Vegas has been incredible for us,” Keselowski said. “We’ve been a solid contender year in and year out. Hoping for big things. Obviously, we need a strong performance for this round and the races in it. This is a tough round and I think we’ll have a great shot at doing just that.”

Harvick struggled at Las Vegas in the spring and was 20th in what has been a winless season. He seemed headed to the victory at Bristol until the antics with Elliott.

He’s not feeling any more pressure.

“There’s no intensity dialed up. It’s exactly the same as it would be for the first race of the season, the second race, the third race,” Harvick said. “Obviously our cars have not performed to the level that we’d have liked them to perform, but we’ve been getting the finishes that we have and keeping ourselves around. We just keep plugging away and keep trying to reach out and do what we can by getting good finishes and not making any mistakes. That’s really what it boils down to this time of year.”

Larson is the 10-3 favorite to win at Las Vegas, according to FanDuel. … UFC President Dana White, country music recording artist Matt Stell and comedian Jim Breuer are among the headliners for Las Vegas pre-race activities. White will be the grand marshal the day after UFC 266 at T-Mobile Arena. … Keselowski leads all active drivers at Las Vegas with three victories. 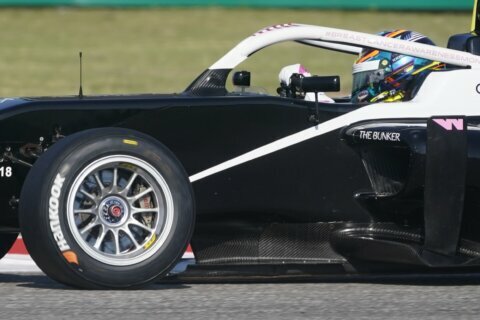 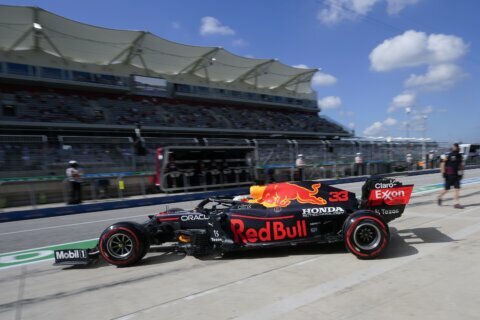 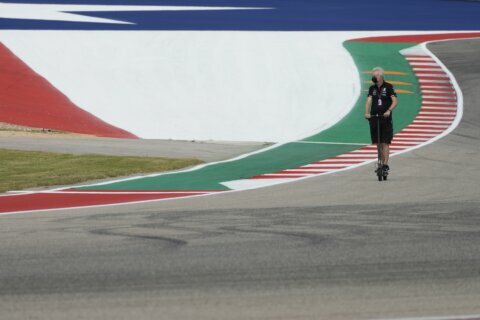