CHARLOTTE, N.C. (AP) — Tony Stewart and friends are heading to the NASCAR Hall of Fame.

The three-time Cup Series champion will be inducted alongside his former car owner Joe Gibbs and teammate Bobby Labonte. Driver Buddy Baker and mechanic Waddell Wilson rounded out the Class of 2020.

“It totally changed from watching my moment to enjoying seeing the guy who helped build my career with Joe and then following that up with Bobby,” Stewart said about hearing his name called first. “It wasn’t about me. It was about all of us and this whole group that was going in.”

Stewart won Cup Series championships in 2002 and 2005 racing for Gibbs after Labonte won one in 2000.

“I guess this couldn’t be any better for me to go in with those two guys. I’m thrilled I can ride their coattails,” Gibbs said.

Fox announcer and NASCAR Hall of Fame member Jeff Gordon knew Stewart was “a lock” to get into the hall, but added that it’s only fitting that Gibbs and Labonte will join him in the same class.

“One wouldn’t have happened without the other,” Gordon said.

Labonte said he was still pinching himself after getting in on his third year on the ballot. He said it felt like it was all meant to be this y ear after Stewart and Gibbs were selected.

He won 49 Cup Series races during his 17-year NASCAR career, and captured a third title in 2011 after breaking away from Joe Gibbs Racing to become a co-owner. Stewart said the day he walked into Gibbs’ office in 2009 and told him he was leaving to become a part owner was one of the toughest of his life.

Gibbs did not initially take the news well, upset about letting a talent like Stewart walk out the door.

Then Stewart looked at him and said, “I want to be like you, coach.”

With that, Gibbs understood.

“I was upset. You don’t want to lose somebody like that,” Gibbs said. “… But the more we thought about it you realize the opportunity he was offered. You look at that and you have to understand what is best for him.”

Said Stewart with a smile: “How can you be mad at somebody when they tell you that you want to be like them.”

Stewart said Gibbs gave him the knowledge to succeed as an owner. He went on to win another championship as an owner in 2014 with Kevin Harvick at the wheel.

Even though he no longer races on the Cup Series, the 48-year-old Stewart’s thirst for racing continues: The Indiana driver is scheduled to spend four days this week racing sprint cars in three states. Gordon called Stewart a “modern day A.J. Foyt” for his love of racing all different kinds of cars.

Stewart broke onto the NASCAR scene by winning three races during his rookie season. He won on every style of track — from road course to ovals — and twice captured the Brickyard 400 at Indianapolis Motor Speedway in his home state.

His championship in 2011 was one for the ages: He won five of the 10 playoff races – including the season finale – to claim his third title by virtue of a tiebreaker over Carl Edwards.

He called it his most memorable moment in NASCAR.

The 78-year-old Gibbs was selected to the Pro Football Hall of Fame in 1996 after leading the Washington Redskins to three Super Bowl titles. Known as a master motivator, Gibbs’ 157 Cup owner wins rank third in series history. They include three Daytona 500 victories and five Brickyard 400 wins.

Gibbs said he was scared to death when he first started a NASCAR team, but soon found out that owning a team was a lot like coaching football

“It’s about people and getting the right people together,” Gibbs said. “And if you can do that you’re going to be successful.”

Labonte joins brother Terry Labonte in the Hall of Fame. He got his first break as a full-time Cup Series driver at 28 in 1993 and went on to win 21 races, including the 2000 title. He is also one of 27 drivers to win a race in all three of NASCAR’s national series.

Baker, one of the most intimidating looking drivers ever at 6-foot-6, was known as the “gentle giant.” He won 19 Cup races, including the Daytona 500 in 1980 with an average race speed of 177.602 mph — a track record that still stands. Baker also was the first driver to eclipse the 200-mph mark on a closed course while testing at Talladega Superspeedway.

Wilson’s engines helped some of the greatest drivers in history. He helped NASCAR Hall of Famers David Pearson, Edward “Fireball” Roberts, Bobby Allison, Cale Yarborough and Darrell Waltrip pile up 109 wins and 123 poles among them.

Edsel Ford was selected as the Landmark Award winner for his contribution to NASCAR. 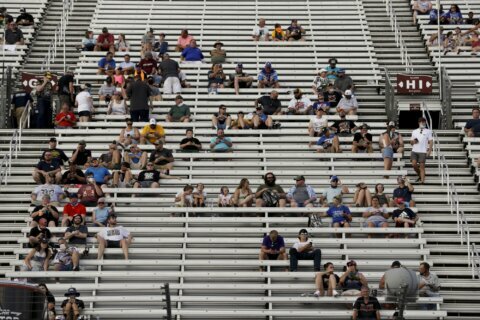 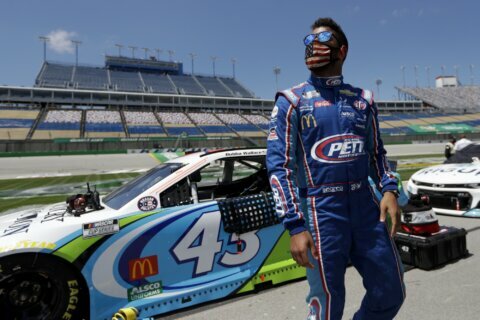 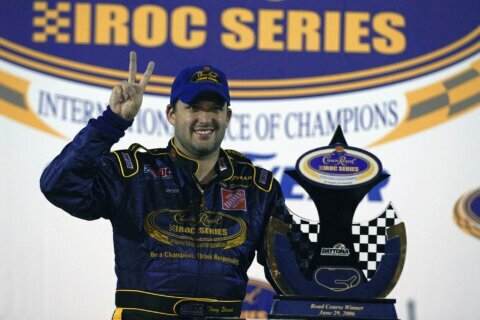 Stewart and Evernham team to recreate IROC as SRX All-Stars