Md. K-9 officer fights to get retired dog back 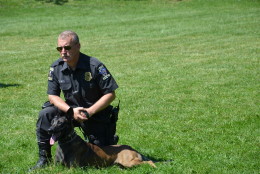 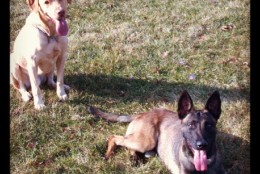 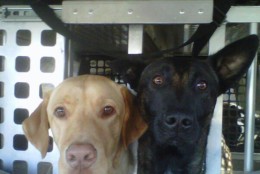 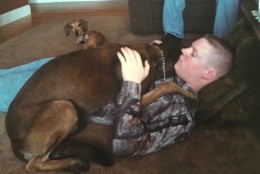 WASHINGTON — He called his K-9 partner his best friend. And now, after working together for four years, that partnership is over.

Officer Gil Fones with the Montgomery County Police Department says the dog he worked with, a Belgian Malinois named Chip, has been retired from the force. But what really pains Fones is that he wasn’t allowed to keep the retired K-9. Instead he was told to surrender the dog, which has been placed with a rescue organization that specializes in rehoming police and military dogs.

Montgomery County police Capt. Paul Starks says Chip’s well-being was a priority in the decision to retire the dog.  Starks told WTOP that police had “concerns regarding the welfare of the dog, the handler the community and the handler’s family.”

Fones says he was bitten on the forearm by Chip during a recertification exercise in April, but insisted the bite was minor and that Chip didn’t even break the skin. Fones says the dog may have been stressed and says that among K-9 handlers the saying is, “not if you’ll be bitten by your dog, but when.”

When asked if the dog was overly aggressive or had bitten anyone other than Fones, Starks said he couldn’t comment further because of “ongoing confidential and administrative issues and actions.”

Fones says after Chip bit him in April, the dog was taken to a veterinarian that the police department uses and several tests were run.

Then in May, Fones and Chip were run through some scenarios — another evaluation of how they worked together. Neither Fones nor Montgomery County police would provide details on what happened during that evaluation.

Fones was moved from the K-9 division to patrol. Fones says he does not know whether any of his own work as a K-9 officer violated any protocols or whether he had mishandled the dog.

“I have not been told anything. That’s what we’re trying to find out,” he says.

Starks says the department did not make its decision lightly. “I wish I could say more, but due to ongoing confidential administrative matters, we are precluded from discussing this case further,” Starks says.

Along with Chip, Fones has a bomb detection dog, K-9, Charlie.

“We work four 10-hour days, and every time I leave the house, the dogs are with me,” Fones  says. Now, he says, when he goes to work, it’s like leaving a part of himself behind.

Fones says the same day he went through various scenarios with Chip, he was told that Chip would have to retire. “And that night, I received a phone call that they did not want me to have Chip in my possession,” Fones says.

Not having Chip around is the hardest part of the situation, Fones says. And that’s why he and the Fraternal Order of Police Lodge 35 has started a petition on Change.org to try to get Chip back to Fones.

Fones says it’s not about getting the dog reinstated.

“It’s more about getting Chip back to us. We just want Chip to come back home where he belongs — where he’s cared for and loved. We’re devastated not having him here in the house.”