Soto had three hits and two RBIs in San Diego’s third straight win. He walked and scored on Manny Machado’s 29th homer in the first. He connected for a solo drive in the fifth, singled in the eighth and doubled in the ninth.

“If he heats up, which we all expect him to, this is going to be a much more difficult lineup to navigate,” San Diego manager Bob Melvin said.

Soto, who was acquired in a blockbuster trade with Washington on Aug. 2, hit just .089 (5 for 56) in his previous 17 games. It was the second time Soto and Machado homered in the same game as teammates.

“I’m trusting these guys,” Soto said. “When you come to a good team and you don’t perform and the team is winning, there is no pressure at all. I wasn’t feeling well at the plate. I started getting to it. I’m feeling better. I’m seeing the ball better.”

San Diego (81-66) moved a half-game ahead of Philadelphia for the second NL wild card. The Phillies lost 5-2 to Atlanta on Sunday.

The Padres outscored the Diamondbacks 20-4 to win the last three games of the series after dropping the opener.

“Early in the games, we looked active,” Melvin said. “We’ve had a tough time early in the game for a while now, and you see guys out here early now. There is a little more sense of urgency from the first pitch on.”

Darvish (15-7) allowed one hit, struck out eight and walked one in his fifth straight win. He improved to 4-0 against the Diamondbacks this season.

“The fastball felt good, so why not use it, right?” Darvish said through a translator. “That’s why I went with it.”

Ketel Marte hit a sacrifice fly in the ninth to account for Arizona’s only run. The Diamondbacks finished with four hits.

The 24-year-old Nelson, a second-round pick in the 2019 amateur draft, pitched 13 scoreless innings over his first two big league starts.

Darvish retired his first 13 hitters before losing a perfect game and a no-hitter on consecutive batters in the fifth. Marte walked with one out before Corbin Carroll dropped a single into short left field.

Darvish misplayed a routine roller back to the mound for an error that loaded the bases with two outs, but he struck out Geraldo Perdomo looking on a slider to end the inning.

Machado and Soto previously homered in the same game Aug. 9 in a 7-4 victory over San Francisco. Soto’s homer in the fifth against Arizona was his first since Aug. 28 at Kansas City and No. 25 overall on the year.

DRURY BACK ON TRACK

San Diego’s Brandon Drury was 5 for 14 with two homers and four RBIs in the series. He was activated Thursday after clearing the concussion protocol.

Drury is 7 for 26 with four homers and eight RBIs in seven games at Chase Field this season, three with Cincinnati and four after being acquired by San Diego at the trade deadline.

“It’s good to feel wanted,” Drury said. “It’s been a tough road, for sure. I had three really bad years, and a lot of teams definitely gave up on me. To have one offer by the time spring had started hurt. But it was a good reality check. You have to keep going. You have to produce.”

Darvish used five different pitches to record his eight strikeouts. He got three on four-seam fastballs, two on split-finger fastballs and one each on a two-seam fastball, a cut fastball and a slider.

The slider that caught Perdomo looking to end the fifth was Darvish’s third slider of the game.

Diamondbacks: Nelson was removed after being struck on his right arm on a line drive by Drury that caromed to second baseman Marte, who threw to first for the first out in the sixth. … RHP Keynan Middleton (sprained toe) was placed on the 15-day injured list. RHP Luis Frias was recalled from Triple-A Reno.

Diamondbacks: RHP Merrill Kelly (12-6, 3.01 ERA) faces Dodgers LHP Tyler Anderson (15-3, 2.62 ERA) on Monday night in the first of an extended five-game series that includes one game that was postponed from the first week. Arizona is 3-11 against the Dodgers this season. 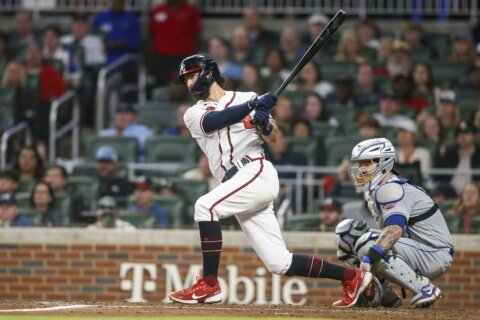 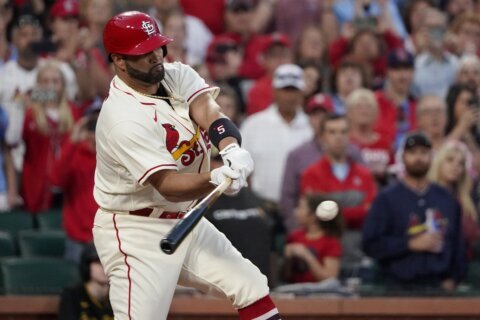 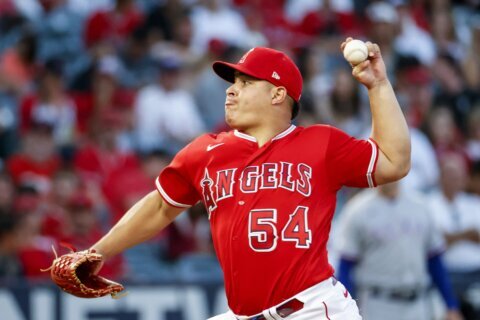