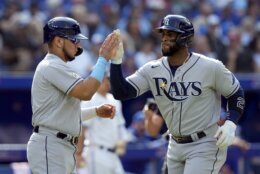 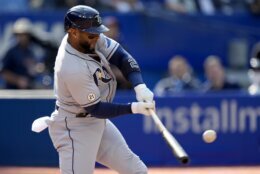 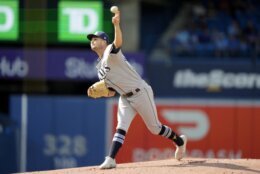 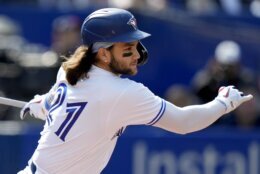 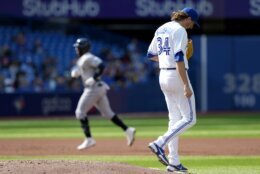 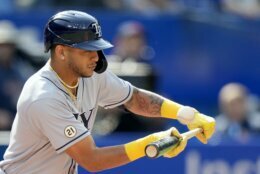 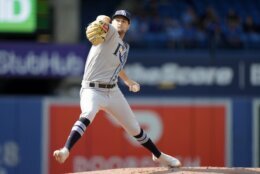 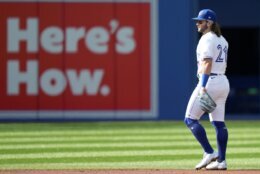 TORONTO (AP) — Yandy Díaz hit a three-run home run and the Tampa Bay Rays — starting an unprecedented nine Latin American players on Roberto Clemente Day — routed Toronto 11-0 on Thursday to pull within a half-game of the Blue Jays in the wild-card chase.

Clemente, the late Hall of Fame outfielder from Puerto Rico, was a two-time World Series winner and NL MVP who played 18 seasons with Pittsburgh. The Blue Jays’ Latin American starters are from five countries: Colombia, Cuba, Mexico, Venezuela and the Dominican Republic.

“Very happy, especially on a day like today,” Díaz said. “I think the Latinos are really putting a stamp on the game of baseball.”

All nine Rays starters, as well as bases coaches Chris Prieto and Rodney Linares, wore No. 21 to honor Clemente. The nine starters posed for a photo on the field after the game.

Díaz said he hoped to put his jersey and a lineup card in a frame to remember the historic day.

Rays manager Kevin Cash said the lineup was based on the batters he wanted to face Toronto right-hander Kevin Gausman.

“Gausman we’ve got as a reverse-split guy, so load up the righties,” Cash said. “It just worked out that they were all the Latin background.”

“I’ve been dying to get back and help this team any way I can,” McClanahan said.

Isaac Paredes hit a solo home run and added an RBI single as the Rays (80-63) won the fifth and final game of the series. Toronto (81-63) will play a four-game series at Tampa Bay, starting next Thursday.

Seattle (80-62), which holds one of the three AL wild-card spots, was idle Thursday, but moved percentage points ahead of Toronto.

Díaz homered in a four-run second inning, his ninth. Paredes made it 5-0 with a leadoff blast in the seventh, his 19th.

Randy Arozarena had three hits, including an RBI single in the ninth, and Manuel Margot added a three-run double later in the six-run frame as Tampa Bay piled on against right-handers Trevor Richards and David Phelps.

Activated off the injured list after missing 15 games because of a left shoulder impingement, McClanahan (12-5) allowed three hits, struck out five and walked one.

“We’re better with him than without him, no doubt about it,” Cash said. He’s such a talented pitcher.”

The left-hander pitched around a pair of singles in the first inning, then retired 14 of the final 16 batters he faced. He lowered his ERA to 2.13.

“Today he was so nasty,” Rays catcher René Pinto said. “We are not machines but he looks like one.”

Gausman (12-10) allowed five runs and six hits in seven innings, snapping a streak of four straight winning decisions. He struck out seven and walked one.

“Too many mistakes and mistakes magnified with guys on base,” Gausman said.

After Vladimir Guerrero Jr. and Bo Bichette hit back-to-back singles in the first, the pair executed a double steal. McClanahan escaped by striking out Matt Chapman and getting Teoscar Hernández to fly out.

Bichette doubled off JT Chargois in the sixth and advanced on Chapman’s infield single but Hernández struck out before Adam came on to strike out pinch hitter Cavan Biggio.

Two fans from Toronto’s Korean community gave some treats to Rays slugger Ji-Man Choi during batting practice, including one labelled Choco Pie. Choi returned the favor with some signed baseballs.

Rays: RHP Shane Baz (right elbow) has started throwing on flat ground but will not return this season, Cash said.

Blue Jays: Toronto has not named a starter for Friday’s home game against Baltimore. RHP Jordan Lyles (10-10, 4.62 ERA) starts for the Orioles.

Judge still at 60, Yanks get rain-shortened win over Sox