SAN DIEGO (AP) — Freddie Freeman drove in four runs on four hits, including a two-run homer, and Trea Turner hit a go-ahead, three-run double for the Los Angeles Dodgers, who beat the San Diego Padres 8-4 on Saturday night to reduce to four their magic number for clinching the NL West.

The Dodgers, an MLB-best 95-43, can clinch a postseason berth for the 10th straight season with a victory Sunday or a Milwaukee loss. They are also closing in on their ninth division title in 10 seasons.

“I think we all know what kind of lead we have,” Freeman said. “But if you start looking at that, and some of the other things, that lead’s going to evaporate and you’ll get a little bit relaxed. I like the way we’ve been playing games the last few days. Even yesterday’s game was just a good baseball game.

The Dodgers continue to dominate the Padres, winning for the 11th time in 14 games this season and for the 21st time in their last 24 matchups. They’ll go for their eighth straight series win against the Padres on Sunday.

Julio Urías (16-7) allowed two home runs to Manny Machado but otherwise quieted the Padres for seven innings to win his third straight start and for the 12th time in 13 decisions.

With Freeman leading the way, the Dodgers bounced back from a 5-4, 10-inning loss in the series opener on a wet Friday night. Freeman drove in Turner on three of his hits and finished a triple shy of the cycle.

Turner tripled between rookie center fielder Jose Azocar and right fielder Juan Soto with two outs in the third and scored on Freeman’s single to right.

The Dodgers loaded the bases with no outs in the fifth against Blake Snell (6-9) and Turner cleared them with a double to center that gave the Dodgers a 4-1 lead. Freeman then doubled in Turner.

Turner walked with one out in the seventh and was aboard for Freeman’s homer to center field, his 19th. Will Smith doubled and scored on Chris Taylor’s single.

“I’m just trying to be a good hitter and sometimes it goes over the fence,” Freeman said. “When guys get on I just want to see them keep making left turns. All four hits were with guys on base today.”

Urías held San Diego to two runs and five hits. He struck out five and walked two. He loaded the bases with two outs in the first but then struck out Jake Cronenworth.

“He was outstanding,” Dodgers manager Dave Roberts said. “I’m having a hard time coming up with adjectives to describe him and what he’s done for us. Just to get through that first inning, his pitch count got up a little bit but the next six were really clean. He threw the baseball really well.”

Machado hit a moonshot homer to left with two outs in the third and another one to right with one out in the sixth. He has 28.

“You’ve got to tip your hat to him,” Urías said through a translator. “He’s obviously a really good hitter and he’s seeing me really well. Hopefully down the road if I see him again, I’ll go look at the video and make those adjustments and see if we can get him out next time.”

Hockey Hall of Famer Willie O’Ree, the first Black player in the NHL, was at the game for a sponsor promotion and spent several minutes visiting with Roberts, bench coach Bob Geren and right fielder Mookie Betts. O’Ree lives in suburban La Mesa, and Roberts and Geren went to San Diego-area high schools. O’Ree was wearing a Padres cap in their old blue-and-white color scheme, and Geren went into the Dodgers clubhouse and got him a new LA cap.

Mark-Paul Gosselaar, who played Padres catcher Mike Lawson in the short-lived Fox drama “Pitch” in 2016, was wearing a Dodgers cap while watching batting practice. Gosselaar, who starred in the TV show “Saved by the Bell,” chatted with Roberts for several minutes. 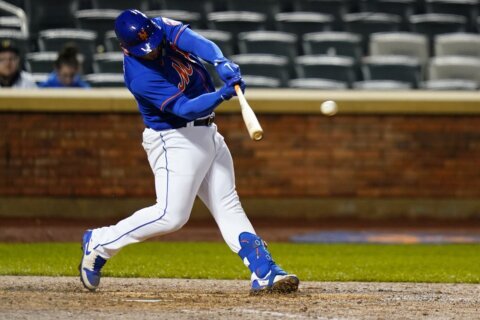 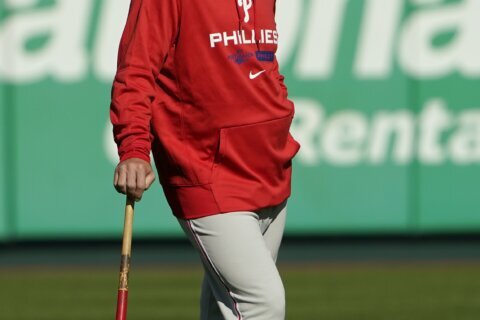