Cronenworth singled home the winning run with one out in the 10th inning, and the Padres beat Los Angeles 5-4 on Friday to keep the Dodgers’ magic number at six for clinching the NL West.

The Padres won for just the third time in 13 games against Los Angeles this year and only the fourth time in their last 23 meetings. San Diego jumped a half-game in front of Philadelphia for the NL’s second wild card.

“It was crazy, especially playing here in the first couple innings with the rain,” Cronenworth said. “The crowd was going crazy — it was awesome. It was a great feeling, especially when you have your home crowd behind you.

“When you’re in those games and it’s back and forth and it’s close, hopefully that’s a good sign for when we’re hopefully in the place we want to be; we’ve been there and we can look back on these games and see how we won,” he added.

Juan Soto started out as the automatic runner on second base in the 10th and the Dodgers intentionally walked Manny Machado. One out later, Cronenworth singled to right field off Heath Hembree (3-1) to bring in Soto and raised his arms at first base.

“You want to try to win the game, but at the same time you want to try to have a good at-bat and pass it to the next guy,” Cronenworth said. “But when you get a good pitch you just want to put a good swing on it and try to drive it to the middle of the field.”

Padres manager Bob Melvin said Cronenworth “all year long has been coming up big in big situations for us. Runners in scoring position late, all those type of at-bats he has excelled in more than any others in the course of the season.”

It was Cronenworth’s first walk-off hit of the season and the third of his career. It was San Diego’s 11th walk-off win and 11th extra-inning win.

“One-run games this year, walk-offs at home, extra innings, all those things create an identity,” Melvin said. “If we’re in them late we have a good chance to win them. At this point it’s not a surprise when we win a close game at home in extra innings.”

Trayce Thompson and Freeman homered for the Dodgers, who can clinch a playoff spot Saturday for the 10th straight season.

The start was delayed 45 minutes due to rain from Tropical Storm Kay. It was drizzling at first pitch and that continued for about three innings before the weather cleared up.

Freeman homered off Mike Clevinger into a beer deck in center field with two outs in the first, his 18th. Thompson’s homer to left with one out in the fourth, his ninth, gave Los Angeles a 4-3 lead. Thompson played in six games with the Padres early this season before being designated for assignment and opting to become a free agent.

San Diego tied it at 4 in the fifth when Soto drew a one-out walk and scored when Betts booted Machado’s single to right field for a two-base error. Dodgers pitcher Dustin May committed an error on Josh Bell’s grounder, putting runners on first and third, but retired the next two batters to end the threat.

Trent Grisham gave San Diego a 3-1 lead with a three-run homer off May into the home run porch in the right field corner with one out in the second. It was his 17th.

May, who lost to the Padres a week earlier at Dodger Stadium, allowed four runs, three earned, on five hits in five innings. He struck out three and walked three.

The Padres placed C Austin Nola on the paternity list and selected the contract of OF Luis Liberato from Triple-A El Paso. They also designated C Cam Gallagher for assignment.

Dodgers: INF Max Muncy sat out after having a cortisone shot in his left knee. Manager Dave Roberts said Muncy might be able to pinch-hit on Saturday. 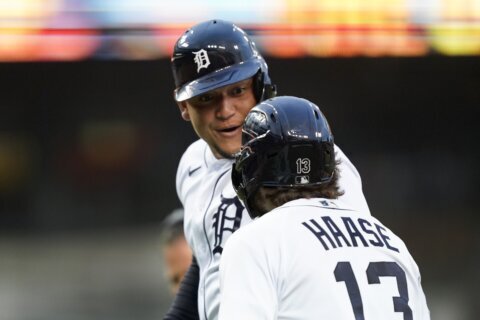