SAN FRANCISCO (AP) — Zack Littell wanted to stay in to pitch to Braves slugger Matt Olson when Gabe Kapler removed him, and the Giants reliever let his frustration boil over before he walked off the mound.

He handed the ball to his manager harder than usual and spoke up about his disappointment. Kapler’s switch to Scott Alexander ended up working out well as San Francisco held on against Atlanta for a 3-2 win Monday night.

Dansby Swanson hit a two-run single with none out in the eighth inning against Littell, who then induced Austin Riley’s double play before Kapler came out. Littell and Kapler then could be seen walking down the tunnel behind the dugout. Littell apologized in Kapler’s office afterward.

“It was purely out of frustration in my performance and it came out in a disrespectful way toward him,” Littell said. “Obviously that was not my intention at all. So that’s on me. I’ve already gone into his office and that’s that. … I can assure you on my side it won’t happen again.”

Kapler said he and Littell discussed that there are better ways to communicate about pitching changes, such as conversations in private.

“I’m happy to discuss those things with players and there’s a way to do that. I think Zack understands that,” Kapler said.

Atlanta starter Spencer Strider struck out nine over five innings while dueling with Alex Cobb (6-6), but the rookie allowed a season-high nine hits as his winning streak ended at four and the Braves missed a chance to gain ground in the NL East.

The first-place Mets lost 5-2 at home to the Cubs earlier and still lead the defending World Series champions by 1 1/2 games.

Olson flied out to end the threat, and Alexander stayed in to finish for his first save.

“They made some good pitches, and Cobb’s tough,” Braves manager Brian Snitker said. “He threw a lot of splits, man, and they were good. We made a little run right there and had the deck stacked in our favor — couldn’t get a big hit.”

The Braves, coming off a wild 8-7 loss at Seattle a day earlier, had won four of five against the Giants and haven’t dropped a season series between the teams since 2016. Atlanta returned to the Bay Area after playing in Oakland last week.

Strider (10-5) took his first loss in six starts since Aug. 7 at New York. He had won his previous three.

The Giants got RBI singles from Willie Calhoun, Luis González and Thairo Estrada.

Cobb struck out seven over seven scoreless innings for a road-weary Giants team that played at Wrigley Field on Sunday night and then returned from Chicago to San Francisco at about 5 a.m. before the quick turnaround for a night game.

Cobb flew home ahead of the team, which was delayed more than an hour because of mechanical issues with the plane.

“For those guys to get a few hours of sleep, wake up, do their routines and go out there and get three runs off probably one of the better pitchers in all of baseball and play the type of defense they did, just gutsy,” Cobb said.

Versatile infielder Wilmer Flores agreed to a new contract with the Giants that guarantees him $16.5 million over the next three seasons and could be worth up to $21.5 million.

He opted to stay in a place he’s comfortable rather than test his value on the free-agent market this offseason.

“It was a no-brainer. Since day one, I’ve been just loving the culture here and the way they treat me,” Flores said. “I just wanted to come back here. I knew I had a chance to go to free agency but I just love everyone here and playing on this team in San Francisco makes me feel good. You can’t buy that. We wanted to get it done and we got it done.”

Braves: 2B Vaughn Grissom played a day after colliding with Grossman on a high pop into shallow right field and grabbing his right leg while on the ground. … The Braves should know more this week about the next steps for 2B Ozzie Albies, rehabbing from a broken left foot that has kept him out since June 14.

Giants: INF Tommy La Stella went on the 10-day injured list with neck spasms after he began experiencing stiffness Sunday and it became worse on the flight home.

The Giants optioned OF Austin Dean to Triple-A Sacramento and selected OF Willie Calhoun and RHP Cole Waites from Sacramento. … C Patrick Mazeika was designated for assignment. 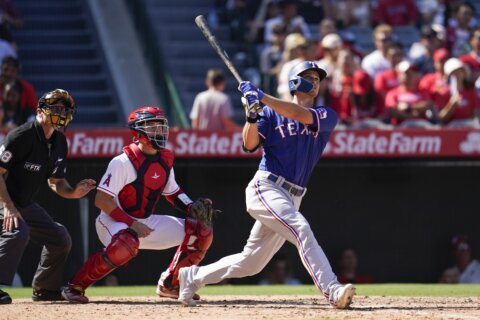