Logan Webb bounced back from his worst outing of the season and allowed four hits in seven innings, helping the Giants take three of four in the Bay Bridge series. Brandon Crawford added two hits, and Austin Slater had a pinch-hit RBI double.

“We’ve been really close to clicking on all cylinders several times this year,” Yastrzemski said. “It’s just nice to win a couple games in a row and see both sides of the ball working really well. We’re going to try and enjoy it for the moment and try to repeat it tomorrow.”

Oakland scored twice in the eighth and got two runners on in the ninth against Camilo Doval before the Giants closer struck out Brown swinging and got Jed Lowrie to ground out for his 14th save.

Yastrzemski hit his 10th home run on an 0-2 pitch from Adrián Martínez leading off the third, a towering solo shot to right-center.

After Estrada’s two-run drive against A.J. Puk in the sixth, also on an 0-2 pitch, Yastrzemski went deep again, this time off Austin Pruitt in the eighth for his fourth career multi-home run game and first this season.

Six days after giving up six runs in five innings to the Dodgers, Webb (10-5) was much more efficient and crisp in winning for the first time in three weeks. The right-hander carried a no-hitter into the fifth, worked around three walks and finished with five strikeouts.

Kapler praised Webb’s performance despite the Giants ace not having full velocity on his fastball.

“Sometimes Logan wants to see more velo but he’s really effective when the ball’s just moving all over the place,” Kapler said. “He can not only survive but thrive with that 91 mph sinker and high quality changeup and slider. He demonstrated that.”

Webb made it through a four-pitch sixth inning after giving up a leadoff single. He got Jed Lowrie to ground into a double play then retired Jonah Bride on a groundout.

“I always will take those,” Webb said. “That’s the name of what I’m trying to do, get quick innings.”

Martínez (2-3) allowed two runs in 4 1/3 innings after being called up from Triple-A Las Vegas on Saturday.

Slater put the Giants ahead 2-0 when he doubled over the head of 5-foot-6-inch left fielder Tony Kemp to drive in Crawford. Kemp initially broke in on the ball then jumped as it sailed over his head and rolled to the wall.

Giants: Estrada was activated off the 7-day concussion injured list before the game.

Giants: LHP Alex Wood (7-9, 4.42 ERA) pitches against the Padres in San Diego on Monday. Wood allowed a season-high-tying six earned runs against the Dodgers on Aug. 2.

Athletics: LHP Cole Irvin (6-8, 3.04) faces the Angels for a second consecutive start Monday in the opener of a three-game series. Cole lost to Los Angeles on Aug. 2 despite allowing two runs in six innings. 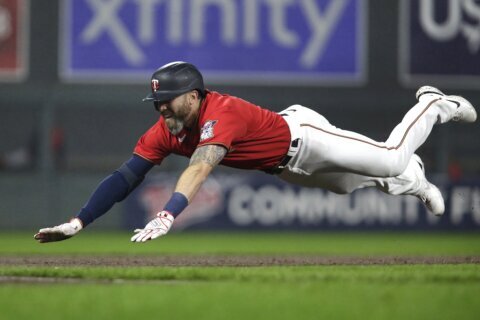 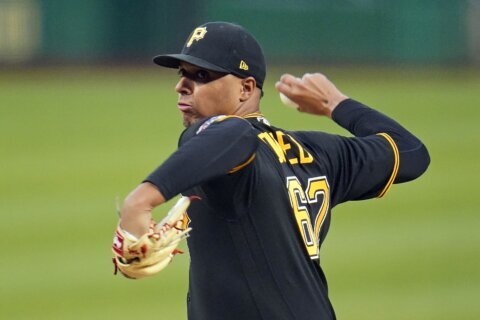 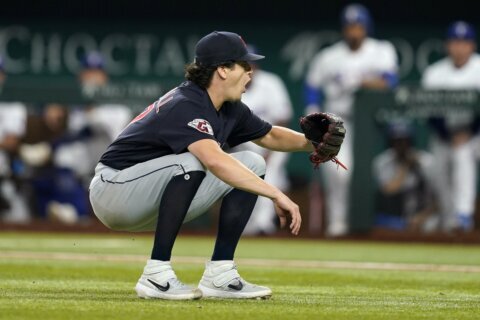