Francisco Lindor had three hits and three RBIs as New York took the opener 8-5, and the Mets stretched their NL East lead to 5 1/2 games.

Mets fans taunted the second-place Braves in the ninth inning of Game 2 by performing the tomahawk chop, a tradition at games in Atlanta despite complaints from some Native American groups that the chant is degrading.

Pete Alonso had three singles, including one with the bases loaded to match Yankees star Aaron Judge for the major league lead with 93 RBIs. The Mets swept their second doubleheader against Atlanta this season and opened their biggest division lead since June 21. They are 11-3 in seven twinbills this year, including four sweeps.

Lindor reached twice in the late game and scored on shortstop Dansby Swanson’s throwing error as Max Fried (10-4) was nearly injured on the play.

Lindor had three hits in the first game, including an RBI single during a two-run first inning against Jake Odorizzi (4-4). His double stretched New York’s edge to 5-0.

Spot starter David Peterson (6-2) helped New York’s seventh doubleheader get off to a good start by allowing three hits in 5 1/3 innings for his third scoreless start this year.

LOS ANGELES (AP) — Will Smith homered and drove in three runs, and Los Angeles continued to sprint away from the rest of the NL West with its seventh consecutive victory.

Max Muncy hit a three-run homer for the Dodgers, who boosted their division lead to a season-high 14 1/2 games with their 16th win in the last 18 meetings with second-place San Diego.

The Dodgers have won six straight series against the Padres. LA has outscored San Diego 16-4 in back-to-back big victories at Chavez Ravine.

The Dodgers also improved the majors’ best record to 74-33 with their 14th win in 17 games since hosting the All-Star Game last month.

San Diego is 1-3 since adding Juan Soto, Brandon Drury and Josh Bell to the lineup at Tuesday’s trade deadline.

Mike Clevinger (3-4) yielded seven hits and five runs while pitching into the fifth inning for the Padres.

Making his first start for St. Louis since being acquired at the trade deadline earlier in the week, Montgomery (4-3) was taken out after five innings for precautionary reasons due to cramping. He gave up two hits and a walk with one strikeout.

Four St. Louis pitchers held the Yankees to just two hits — singles in the first and third. Only two runners reached second base. Giovanny Gallegos pitched 1-2-3 ninth inning to earn his 11th save, striking out the final two hitters. St. Louis has won a season-high six straight games, and eight of nine.

Joey Votto and Donovan Solano each had a solo homer for the Reds, who hadn’t scored more than three runs since an 8-2 win July 30 over Baltimore.

Milwaukee fell a game behind St. Louis in the division race.

With the Reds leading 2-0 in the fourth inning, Barrero launched a two-run homer off starter Aaron Ashby (2-10). The third-year shortstop added a solo shot in the sixth off reliever Hoby Milner.

Right fielder Aristides Aquino threw out a runner at the plate for Cincinnati. Buck Farmer (1-1) won in relief of Nick Lodolo.

Andrew McCutchen and Keston Hiura homered for the Brewers.

PHILADELPHIA (AP) — Rhys Hoskins homered in the first inning for the third straight game — the first Philadelphia player to do it since at least 1900 — in a rout of Washington.

J.T. Realmuto and Matt Vierling also went deep for the surging Phillies, who have won nine of 10 to move a season-best 11-games over .500. Realmuto also tripled and drove in three runs and Jean Segura had three hits for Philadelphia, which will try for a four-game series sweep of the Nationals on Sunday.

Luke Voit homered and Lane Thomas had three hits and an RBI for Washington, which is an MLB-worst 36-73. Patrick Corbin (4-16) lost his sixth straight decision.

Oneil Cruz hit a two-run homer for Pittsburgh in the fourth to cut an early Baltimore lead to one, but McKenna came through as a pinch-hitter the following inning, putting the Orioles up 5-2 with a big two-out hit to left.

Baltimore, which entered the day 1 1/2 games out of the final wild card in the American League, has now won 21 of its last 28 games. The Orioles (56-51) have already reached their highest win total in five years.

MINNEAPOLIS (AP) — Jorge Polanco had a pair of two-out RBIs and Jose Miranda homered for Minnesota, which beat Toronto behind a stellar bullpen performance.

All-Star Luis Arraez went 3 for 5 with an RBI for the first-place Twins, who kept their two-game lead on Cleveland in the AL Central.

Arraez doubled twice and scored on both of Polanco’s clutch hits — a single in the third inning off Blue Jays starter Mitch White (1-3) and a double in the fifth after White was replaced by Tim Mayza.

Trevor Megill (3-1) led off a relief parade with a perfect fifth, and newly acquired closer Jorge López finished up with a hitless ninth.

Pratto blasted a two-out, 3-2 changeup from Garrett Whitlock (2-2) an estimated 424 feet to center field for his second career homer and first at Kauffman Stadium.

The Royals began and ended the game with homers. MJ Melendez hit his second leadoff homer of the series, a 434-foot drive to right field for his 12th longball this season. Kyle Isbel also homered for Kansas City. Dylan Coleman (3-1) retired the Red Sox in order in the ninth.

Bobby Dalbec hit a two-run drive for Boston in the fourth inning and Alex Verdugo went deep in the sixth to tie the game at 4-4.

David Fletcher homered and drove in three runs for the Angels, who dropped the opener 2-1 as Ty France hit a two-run homer and George Kirby (3-3) struck out eight over six innings for the Mariners.

In the nightcap, Moniak connected off Chris Flexen (7-9) for his third major league homer. The top pick in the 2016 draft was acquired from Philadelphia at Tuesday’s trade deadline in a deal for pitcher Noah Syndergaard.

Moniak exited in the ninth after taking a pitch off his finger on a bunt attempt. He went for X-rays, and Angels interim manager Phil Nevin said he was not expecting good news.

Luis Torrens homered off Detmers (4-3), who permitted six hits and struck out seven.

Erik Swanson pitched the ninth in the opener for his third save. Moniak had an early RBI single, but Jaime Barria (1-2) took the loss.

Playing in front of their first sellout crowd since opening day, the Tigers won for the fifth time in 16 games on the night they retired Whitaker’s No. 1. Garrett Hill (2-3) picked up the win, allowing one run in 5 1/3 innings.

Rays pitching coach Kyle Snyder injured himself while trying to visit the mound in the seventh, forcing manager Kevin Cash to deliver his own message to McClanahan.

McMahon drilled a high fastball from Ian Kennedy (4-5) into the left-center seats for the game-deciding drive. The hard liner left the ballpark in a hurry, just clearing the wall to the left of the 413-foot sign. It was his 10th homer of the season.

The Rockies rallied twice from one-run deficits in the late innings. Colorado rookie Elehuris Montero hit the first homer of his big league career to tie it 2-all in the eighth.

Senzatela gave up two runs on nine hits over seven innings, striking out two and walking none. Carlos Estévez (3-4) worked a scoreless eighth, and Daniel Bard handled the ninth for his 23rd save in 25 opportunities.

ARLINGTON, Texas (AP) — Dane Dunning allowed one hit in seven dominant innings against his former team for his first win since April, and Adolis García drove in five runs as Texas shut out Chicago.

Dunning (2-6) struck out six and walked one, winning for the first time in 16 starts since a 3-1 victory April 30 over Atlanta. Chicago traded the right-hander to Texas in a December 2020 deal for pitcher Lance Lynn.

Ezequiel Duran hit Michael Kopech’s first pitch of the third into the Rangers’ bullpen in right-center for a home run. With two outs, two walks and a single by Corey Seager loaded the bases for García. He lined a 3-1 pitch for a two-run single and a 3-0 lead.

Kopech (4-8) got out of the third with a groundout by Leody Taveras on the 38th pitch of the inning.

All-Star José Ramírez added two hits and an RBI, and Andres Gimenez and Myles Straw had two hits apiece. The Guardians pulled within 1 1/2 games of first-place Minnesota in the AL Central with the combined six-hitter.

Quantrill (8-5) struck out four with a lone walk, extending his winning streak to four and remaining undefeated at Progressive Field.

Cleveland took a 4-0 lead with three runs in the second off Luis Garcia (8-8), highlighted by Rosario’s liner to center that drove in Straw and Gimenez. Ramírez doubled home Rosario in the first for his 87th RBI.

Carlos Rodón (10-6) allowed one run over 5 1/3 innings for his team-leading 10th victory as the Giants won for the fourth time in 16 games since the All-Star break.

Wade, who doubled and scored in the second, hit his fourth home run of the season off Adam Oller (1-5) following Bart’s leadoff single.

Davis, acquired earlier in the week from the Mets for Darin Ruf, followed with a pinch-hit shot to center on the first pitch from Kirby Snead for his second home run in three games with his new team.

P.J. Higgins homered and singled, and Nico Hoerner added three hits and an RBI to help the Cubs defeat Miami for a second straight day after losing five straight.

Smyly (4-6) finally prevailed at home in his sixth start this season at Wrigley after signing a one-year, $5.25 million contract in March that includes incentive pay and an option for 2023. The 33-year-old lefty allowed five hits, struck out four and walked none before being replaced with Mark Leiter Jr. with two outs in the seventh. 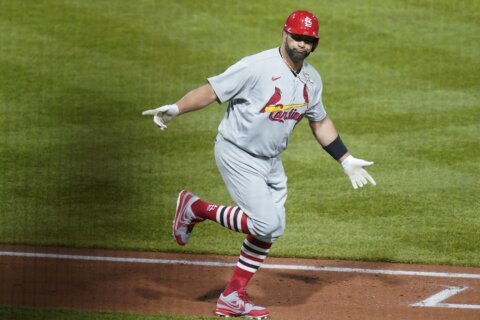 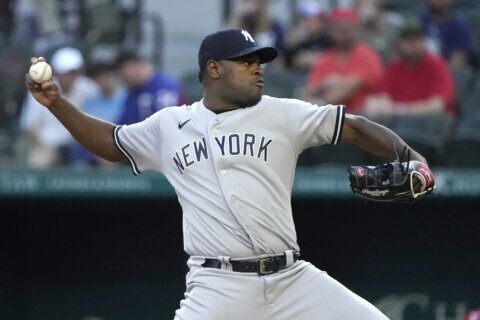 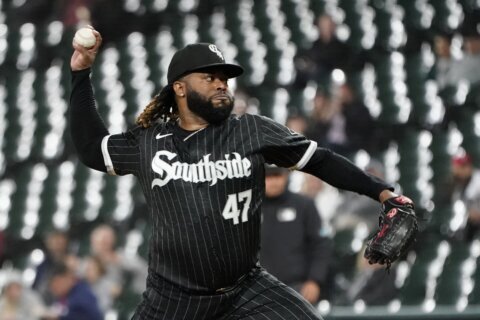