BOSTON (AP) — The Atlanta Braves arrived at Fenway Park looking to put a disappointing series against the NL-East leading New York Mets as far in the rearview mirror as possible.

Austin Riley did his part to start that process.

Riley had a go-ahead, two-run single in the 11th inning and the Braves rallied for a 9-7 win over the Boston Red Sox on Tuesday night.

Riley also hit his 30th home run of the season, a towering, two-run shot over the Green Monster, and an RBI triple to help Atlanta snap its first three-game losing streak of the year.

“It was huge,” Riley said of getting back in the win column after dropping four of five to the Mets. “Coming off this weekend I felt like that was a needed win, and we got it and hopefully we can build off that.”

Jarren Duran, Christian Arroyo and Tommy Pham homered for the Red Sox, who have lost three straight and five of six.

With automatic runner Michael Harris II on second base in the 11th, Ronald Acuña Jr. singled and then stole second, setting up Riley’s hit.

Atlanta scored five of its seven runs with two outs.

Dylan Lee (3-0) got the win and Tyler Matzek struck out two in a scoreless 11th for his first save of the season. Braves starter Charlie Morton allowed five runs and six hits over six innings. He struck out seven and yielded all three Boston homers. The right-hander has just one win in his past 11 outings.

Atlanta struck out only four times after whiffing a season-high 19 times in Sunday’s series finale against the Mets.

“That’s a good lineup over there. They’ve got some tough right-handed hitters,” Red Sox manager Alex Cora said. “We’ve got to throw the ball better. … We’ve got to be better putting the ball in play and obviously throwing strikes.”

Atlanta took a 7-6 lead in the 10th when Orlando Arcia drove in automatic runner Eddie Rosario.

But the Red Sox tied it in the bottom of the inning after automatic runner Xander Bogaerts advanced to third on an infield single by Alex Verdugo and scored on a sacrifice fly by J.D. Martinez.

Braves: Boston reliever Garrett Whitlock got the first out of the 10th before Arcia sent a sharp double to left field, allowing Rosario to cross home plate and put the Braves in front 7-6. But Arcia hurt himself coming around first and limped into second before pulling up lame and being tagged out as he overran the bag. Snitker said the diagnosis is a left hamstring injury that will land Arcia on the injured list. “He heard it pop and that’s never good,” Snitker said.

Red Sox: First baseman Eric Hosmer fouled a ball off his left leg in the fourth and exited with a bruised knee. He was replaced by Bobby Dalbec. … Boston placed right-hander Tanner Houck on the 15-day injured list with inflammation in his lower back. Ort was recalled from Triple A-Worcester. … OF Kiké Hernández (hip flexor) took batting practice before the game and will begin a rehab assignment Wednesday with Double-A Portland. He could rejoin the team next week for its three-game series at Pittsburgh. … RHP Michael Wacha (right shoulder inflammation) allowed two runs on two hits and struck out five over 4 2/3 innings for Portland in what could be his final rehab start.

Riley tied Hank Aaron’s franchise record, becoming the fastest player to reach 30 home runs and 30 doubles in a season. Aaron set the mark in the Braves’ 111th game of the 1959 season. Both accomplished it at age 25. 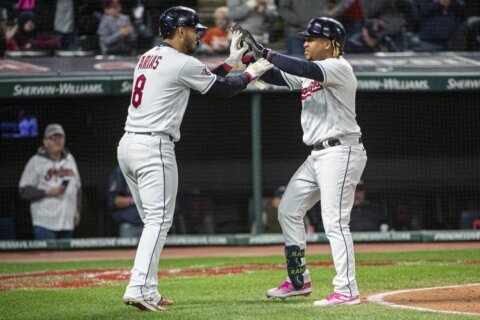 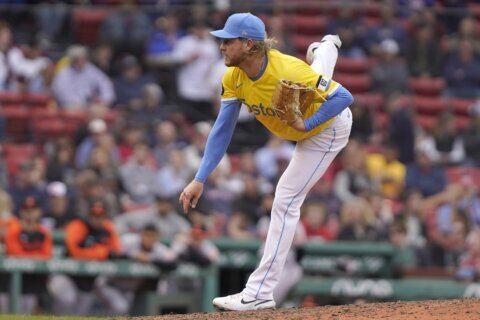